Cakewalk recently observed their 30th Anniversary, and announced that their recent incremental May update to Sonar launches “a year-long celebration” with implementation of a number of new features and updates.

New features in the update include a Ripple Editing feature, a new Adaptive Limiter that goes beyond the norm, and support for Microsoft’s efforts in Pen technology.

Ripple Editing allows the user to conveniently rearrange sections of a song and maintain the sync relationships, without leaving unintended gaps between the clips. When adjusting the position of a clip in the Track view, SONAR will automatically adjust the start position of all subsequent clips to compensate for the change.

The user can choose to ripple-edit just the selection, or all tracks plus meter/key changes, tempo changes, and markers. Supported gestures include; Cut, Copy, Paste, Move, and Delete. These gestures can be used on Tracks or Buses and the automation will follow along with markers and meter changes when using Ripple Edit All. 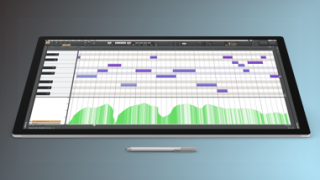 Another new feature in the Sonar update is support in the DAW for Microsoft’s advancements in pen technology. With computers like the Surface Pro and Dell Canvas, the pen offers “precise control and a natural feel” that complements touch. Additional improvements to the Piano Roll View (PRV) and Touch response, along with several fixes implemented directly because of community feedback, improve the Sonar workflow, making it faster and easier, especially for MIDI.

The PRV now offers enhanced support for a pen’s eraser functionality and pressure-sensitive tip when drawing Note events and continuous controller data. You can also use the button on the side for opening menus and lassoing notes in the Piano Roll.

For information on the Cakewalk Sonar update, pricing and availability and upgrade paths for the software, and details of additional perks such as free presets for Sonar’s QuadCurve EQ, and the Tech+Music eZine that used to accompany SONAR releases, consult the Sonar website.