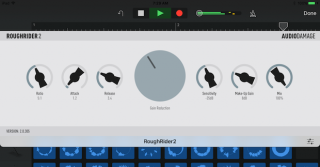 Audio Damage has released their Rough Rider 2 compressor as a free download for iOS.

Rough Rider 2 brings the desktop plugin to your iPad as a stand-alone application (with Inter-App Audio) and as an AUv3 for use with hosts that support it, like GarageBand, Cubasis, and Audiobus 3.

AD’s Chris Randall says that they are testing the waters for bringing other plugins to iOS:

Rough Rider 2 is available now in the app store, and like any good drug dealer, we give you the first taste for free. If you run in to any issues at all, don’t hesitate to drop us a line.

Grind is next in line, and is currently awaiting TestFlight review so the testers can get a piece of that action, but it is pretty much done. Once that’s released, we’re going to turn our attention back to desktops for a bit, so we can see how things shake out. I don’t want to release everything for iOS, and then find out I did something terribly wrong.

But once we’re sure that things generally work, we’ll push out Dubstation 2 and Eos 2 in short order. I don’t expect any trouble building either for iOS.