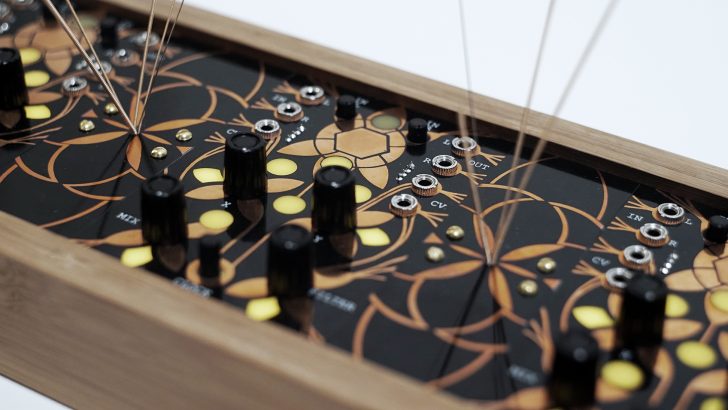 Folktek shared this series of videos, demonstrating the Resonant Garden, an acoustic-electronic hybrid, designed to create anything from beats and oddities to dense soundscapes.

The garden essentially utilizes three Alter circuits, each equipped with a mic pre-amp, and 4 garden (stringed) panels for generating acoustics. By plucking, rubbing, tapping or even bowing, those micro-acoustic sounds become amplified and effected by the Alter in any number of ways.

In essence, the garden is a large microphone designed to pick up vibrations and process them.

There are two Alter 1 designs and 1 Alter 2. Each Alter 1 has seven different DSP effects which is selected by touching the copper hexagon:

Alter 2 has the following effects:

On each of the Alter sections, the following is present:

The mic pre-amp has a gain control so the level can be adjusted according to how you intend to play.

1/8” stereo inputs with separate level/gain control for right and left channels. These level controls can also act as mute as they can take the signal to 0. They can also add gain to a quiet signal.

In it’s natural state, each Alter utilizes the garden panel acoustics and each Alter outputs its own signal. By plugging in to the left input of any Alter, the mic amp is bypassed. This means that the signal can be chained from one alter to another, utlizing the single final output. This chain of effects can result in an incredibly broad range of sound.

The Folktek Resonant Garden is available for US $999.