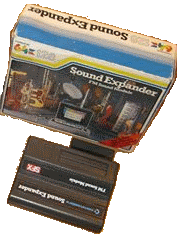 Developer Matt Simmonds let us know that he’s released a new driver for the Commodore 64 that’s designed to let you get the most of the rare Commodore Sound Expander cartridge.

This was an official 1980s cartridge that added a Yamaha 3526 FM chip to the Commodore 64 computer, supplied with a keyboard and editor for musicians. Unfortunately there was very little software written to support it.

My new driver translates music written for the SID chip into FM data as it plays, allowing (in theory) any C64 music editor to be used to write FM music. As a bonus the SID chip itself is free and can be played alongside the FM tracks, allowing new combined sounds from the SID and FM together.

Simmonds also shared this video, which demos the driver with a song that features 9 FM channels & 3 SID channels: