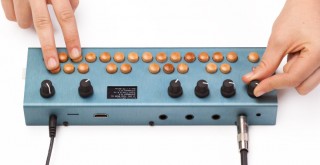 Critter & Guitari has released version 3 of the Organelle operating system.

The new OS is a free update from the C&G site.