The Wave is a ring that enables the user to control sound, change effects and send commands with hand gestures. The device connects wirelessly over Bluetooth, so it should work with anything that supports MIDI over Bluetooth. The ring is completely programmable by the user,  so it can be set up to suit the user’s specific needs.

The Wave works right “out of the box” with desktop digital audio workstations, mobile devices, and “just about anything” that receives Bluetooth MIDI. It gives both visual and haptic feedback. The ring also has buttons for additional control. 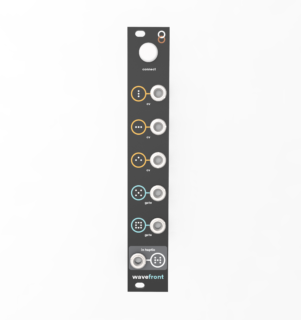 The Wave user can choose which parameters to control with the ring, with an option to pair the parameters with the desired motion, taps, or clicks of a button. Wave offers the capability to store several different patches of parameters, allowing the user to cycle between them.

Wave can connect directly to any music software, appearing in the same way regular MIDI controllers do; however, users can download and use software developed for Wave to customize further, create their own patches, set up directional sections and more.

The company is also working on a Eurorack module (pictured) that will let you generate CVs with gestures. Acording to Genki Instruments developers, the Euro version will also have very low latency, because it won’t have the overhead of a computer operating system.

A few days ago, Genki Instruments shared with us a short demo of a possible way to use Wave with a modular setup:

“Here we’re doing user testing with Icelandic artist Hermigervill as part of the development of our Eurorack module, Wavefront, which will allow Wave to connect directly to your modular synths.  Here we connected Wave to the setup with a small workaround, but it’s part of user testing to optimize the functions people might want to see in our module.”

Wave was developed in close cooperation with musicians and had its live onstage debut last November at Iceland Airwaves 2017. Synthtopia caught up with Genki Instruments COO Haraldur Hugosson recently at The NAMM Show and got a demo and overview of the wireless controller: 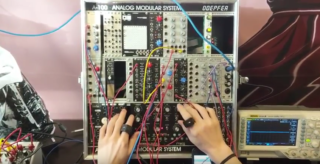 The crowdfunding campaign continues for another month.  Developers at Genki Instruments say Wave is now market-ready and ships to first buyers in December 2018.

For additional information, check out the Genki Instruments website.