The four members of Node all have successful careers outside of the group: producer Flood; producer and composer Ed Buller; Doctor of Music Dave Bessell; and Hollywood film composer Mel Wesson. Because of this, getting them together for a live performance,  with a huge wall of synths, is both a rare occurrence and a massive undertaking.

We asked the group about their approach to collaborating and performing with large modular systems. Dave Bessell provided most of the responses, with input from the other members.

Synthopia: Because of the nature of Node, it may not be immediately clear to readers what role you each take within your recordings and performances, compared to a more traditional band, with a drummer, guitarist, bassist, etc. How do you see your roles within the group?

Node: The nature of the musical roles within Node is very fluid. Because we work largely by improvisation, then any person can take on any part of the musical texture whenever they feel like it.

We have a sort of unspoken rule that no one critiques the contribution of another band member – if the music goes in a direction someone doesn’t like then it’s up to them to add the ingredients they think are missing to pull the music back to where they would like it to be.

Having said that, over time we have each gravitated towards certain roles within the band – but we don’t always stick to them!

One thing that happens occasionally is that we lose track ourselves of who is making each sound, because the blend becomes so seamless and the set up is so complex. From an audience perspective, you may be able to spot when that has happened because someone will try to alter a sound they are not actually making, when they realize that they have been tweaking a knob without it making any difference they will sometimes dissolve into laughter.

Synthopia: How do you work to be a cohesive group of synthesists, but with unique identities? Is figuring out roles or parts within Node different than for other groups you’ve worked with?

Node: That’s an interesting question – Node is one of those happy situations where musical cohesion and individual identity balance themselves in some kind of magical way, without anyone having to lay down rules or work too hard at it. Probably that happens because everyone in the band is pretty competent and experienced in a variety of musical ways that just happen to interlock nicely. Maybe that makes Node different from some other groups.

The very first time Node played together at Master Rock Studios, nobody really discussed anything beforehand, we just set up, tuned up and then started playing and everything fell into place. We have been doing it that way ever since, on the basis that, if it isn’t broken, then don’t try to fix it.

It was interesting when Mel joined, we were not sure what effect that would have on the group cohesion, but he dropped right in to the working method pretty seamlessly. We honestly don’t intellectualize it very much, we just turn up and play. What you hear is what comes out. 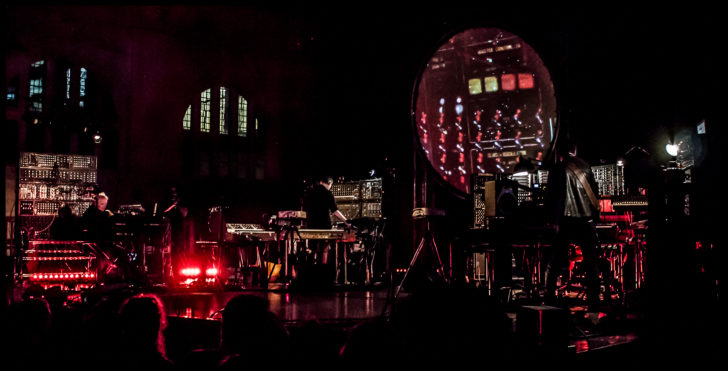 Synthtopia: Can you tell us a little about your gear choices and how they reflect the role you see for yourself within Node?

Node: It would be nearly impossible to list all of the gear for everyone, the list would be ridiculously long. Lets just say, between us, we have one of the most extensive retro rigs around and a fair bit of modern stuff too.

Each of us has ‘go to’ instruments which we tend to gravitate towards, though:

The way this affects our working methods is:

We don’t use that many polyphonic keyboards, so things like the Alesis A6 and Mel’s Prophet become important for pad sounds. Ed sometimes goes for classic polyphonic sounds like the Fender Rhodes and Mellotron.

Synthtopia: It’s rare to see a group of group of musicians taking on the challenges of live performance with big modular systems. Can you share some of the background on how the Royal College Of Music performance came together?

Node: The main challenge of putting on a performance with that much equipment is just logistics. Its very expensive to move and insure that amount of vintage kit.

The performance at the Royal College of Music was really a thank you to the hard core Node fans who have supported us along the way. It’s not viable from any sensible financial perspective to mount a performance of that sort, unless you can attract an audience of several thousand. Basically the album sales and our publisher made that gig possible, along with the generous help of the Royal College of Music.

Synthtopia: Were there some unique technical or musical challenges to putting on a performance with large-format synth rigs?

Node: Technically, sending a reliable clock, with no latency, to each band member is a bit of a challenge!

Musically its not so difficult – at least for the people in Node, who are all accustomed to keeping track of a lot of equipment in real time. You have to think carefully about how things are patched to give the maximum flexibility for live improvisation.

I guess we must be a bit crazy to go onstage and improvise an entire set, with no computer safety net, but that’s how we like to work. In Node, everyone is a big fan of the working methods of electronic musicians from Germany in the 1970’s – so called Krautrock. Each band member has slightly different reference points within that style, though.

For example, Flood might be more influenced by Can and perhaps Faust, Ed is keen on Kraftwerk and Tangerine Dream, Dave might go for Can, Neu, Cluster and Eno, Mel is probably a bit more influenced by English bands of the same period that used electronics, early Hawkwind for instance.

Added to that are more modern influences, of course, too many to name really. But our main working methods in Node come from that retro period. We think that real time improvisational and exploratory method has even more relevance today, now that it’s possible to automate everything in minute detail.

Recently, a reviewer commented that Node explores the other side of the Rubycon, the route Tangerine Dream could have taken after that album, but never did.

Synthtopia:  Do you have suggestions or links that you can share for readers interested in learning more about you and your music?

Node: Node records are released by Ian Boddy’s DiN label. Flood generally keeps a low profile online but there are many things written about him and a few interviews on youtube. Check out the recent documentary on Hansa studios, in which he takes part and gives some insights into his working method.

Ed has a youtube channel, and you can find the latest Node Live video there:

Dave is also releasing solo material and collaborating with other artists. You can find his solo work and other collaborations at DiN records.

Mel has a website, which he doesn’t keep up to date as much as he should!

Finally, there is a nice interview with Node at Sound on Sound.

Node Live is available now on DiN records and via Amazon and other online retailers. It includes edits of four tracks, record live in concert, as well as a bonus piece, recorded at the group’s rehearsal for the event. The album is released as a limited edition run of 2,000 copies.

DiN describes the album as ‘a must for lovers of Berlin School inspired sequencer music’.

You can preview Node Live below: