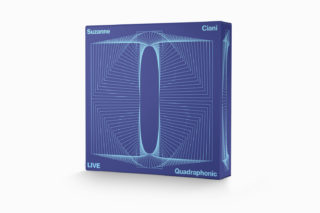 Synthesist Suzanne Ciani has announced LIVE Quadraphonic – a new album that captures a live performance in San Francisco on March 5, 2016.

The album will be available digitally – but also in a limited-edition Quadraphonic vinyl package, produced in conjuntion with Third Man Records. They say it’s the first quadraphonic vinyl release in over 30 years.

For this experimental release and inspired by the Buchla 227 quad output module, there is a limited edition of only 227 LPs, numbered, 45 rpm, 180g quadraphonic vinyl discs sold, plus a custom quadraphonic hardware decoder made in collaboration with Involve Audio to decode two channels of audio from the vinyl disc back to the four-channel recording- and with stunning results.

The vinyl discs were thoughtfully pressed at Jack White’s Third Man Pressing plant in Detroit, MI and are fully compatible for play with any vinyl playback systems in stereo. Current owners of vintage Regular Matrix quadraphonic receivers may also listen to LIVE Quadraphonic in quad via any format, digital download, streaming, radio broadcast or vinyl.

Roe Peterhans, Oblique Strategist at Third Man’s Cass Corridor location, says “We really enjoyed the opportunity to work on Suzanne’s project. Adventurous projects like this are the kind our plant was designed for.”

LIVE Quadraphonic will be available June 4, 2018 for digital download. The vinyl edition is priced at US $277. See CyKik for details on the vinyl release.