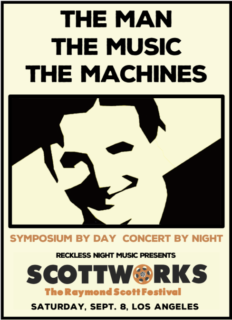 Scottworks – a symposium focusing on electronic music pioneer Raymond Scott and his work – is scheduled for Sept 8, 2018 in Los Angeles.

The event will be held at the Colony Theatre in Burbank, and will feature Herb Deutsch, co-inventor of the Moog Synthesizer, and Hal Willner, Grammy Winning music producer who Executive Produced the first Raymond Scott reissue, Reckless Nights and Turkish Twilights.

The event will also feature exhibits and performances of Scott’s works. Tickets include coffee and pastries in the morning and a meet and greet reception that includes wine and beer after the day’s events and before the concert.

Tickets are now on sale.

The moment one gives close attention to anything, even a blade of grass, it becomes a mysterious, awesome, indescribably magnificent world in itself.