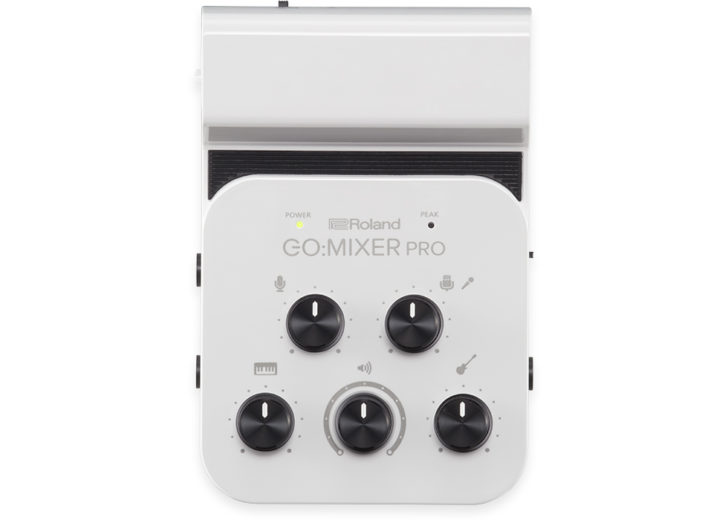 GO: MIXER PRO. Roland’s hardware GO:MIXER PRO adds sounds quality and control to the smartphone’s video capabilities, combining multi-channel mixing, sound monitoring, and more in an affordable, palm-sized device. GO:MIXER PRO enables the user to connect and mix as many as nine audio sources at once, including pro-quality powered microphones, guitar/bass, and line-level gear like keyboards and drum machines. Dedicated controls provide volume adjustment, and the resulting stereo digital audio output is sent straight to the user’s smartphone for capture in a video or audio app.

GO:MIXER PRO can be powered by the smartphone connection or via four AAA-size batteries to conserve the mobile device’s battery. The mixer also boasts a headphone output with level control for monitoring the mix and listening to backing audio from the smartphone while performing. If desired, the user can route this backing audio to the capture app, along with the live audio inputs, via a dedicated Loop Back panel switch. A Center Cancel function is available as well, enabling users to create karaoke-style tracks on the fly. And GO:MIXER PRO also can be used as a standalone battery-powered mixer “for practice and on-the-go performing.” 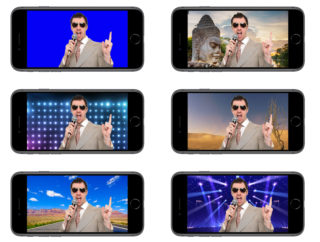 Virtual Stage Camera App. Roland’s Virtual Stage Camera App is the partner app for their new GO:MIXER PRO. The app allows users to quickly create videos that, the company says, “look like they were done with more sophisticated video equipment.” The free app can remove the background from a performance video, in real time, and replace it with movie footage, or with stills stored on the smartphone. Virtual Stage Camera can also instantly produce a blue/green screen background in a video as it is being recorded, for later manipulation in a video-editing app like Apple’s iMovie.

GO:MIXER PRO is also designed to work seamlessly with Roland’s 4XCAMERA, a free video app that makes it possible to create split-screen music performance videos. Projects can be shared online among 4XCAMERA users, enabling collaborations with other musicians in any location.

Pricing and Availability. Roland’s Virtual Stage Camera and 4XCAMERA apps are compatible with iOS mobile devices from Apple and are available as free downloads from the App Store. Extended functionality is available in each app by plugging in a GO:MIXER PRO or making a small in-app purchase.