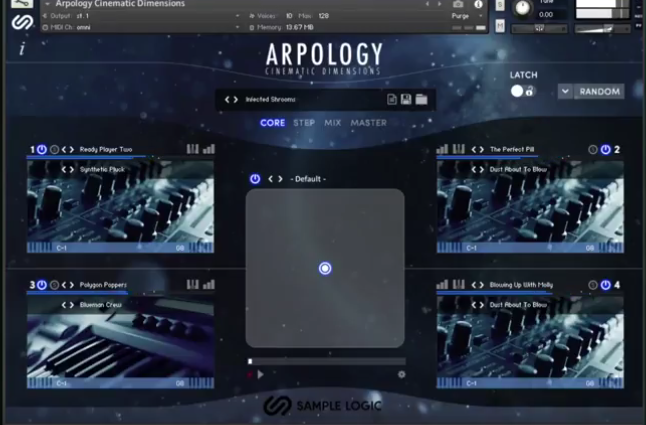 Today Sample Logic debuted their newest product, Arpology – Cinematic Dimensions. This latest introduction quadruples the power of the original Arpology, with the addition of an all-new 4-core performance engine, individually animating 4 instruments to create one cohesive sound. This allows users to blend up to 4 instruments while using different arp patterns at the same time, yielding creative results.

“The world’s most powerful arpeggiator.” In 2012, Sample Logic developed a ground-breaking arpeggiator named the “Step Animator” which became the driving force behind a fantastic multi-genre sample library, the original Arpology. The library “conjured magic” from single instruments with versatile step animation. After a year of development, this new iteration of Arpology is not only more powerful than its 2012 predecessor, but includes over 23GB of recorded instruments (from the original Arpology, along with newly-recorded content). The library boasts over 1,200 presets designed to deliver flexible sequencing and arpeggiated grooves for all types of cinematic productions.

Infinite Randomization. Built from the ground up, Arpology: Cinematic Dimensions is an entirely new product which has been specifically designed for musical motion. Each of the presets are uniquely diverse in style and scope. Cinematic Dimensions also features powerful built-in randomization functions, allowing users to remix fragments of presets to forge together uniquely original cinematic sequences.

Dynamic Preset Browsing. Sample Logic has also built in an intuitive, dynamic preset browsing system in Cinematic Dimensions for more easily choosing presets, and for playback manipulation.  The browser allows the user to explore any sound available in the library from one central location. Access sound sources, sound cores and instrument presets with the ability to solo and bypass cores and activate step animators while browsing or performing. Filter through sources, effects, patterns or any combination of these, or even isolate specific attributes of a preset while sorting through each preset, one by one. 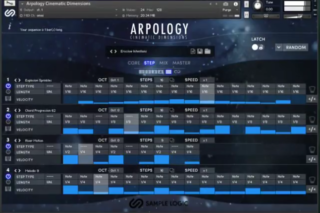 Intuitive Infrastructure.  Beyond the browsing system, Sample Logic has designed a straightforward approach for digging deep into presets and customizing them in Arpology – Cinematic Dimensions. The framework of the interface is divided into 4 main sections: CORE, STEP, MIX and MASTER: 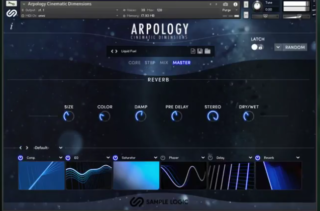 Pricing and Availability. Sample Logic Arpology – Cinematic Dimensions is available now from the Sample Logic webstore, at an introductory price of $349.99US (reg $399.99) or crossgrade for owners of the original Arpology, using your serial number, for $299.99 US.