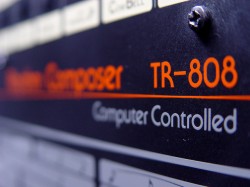 On 909 Day, Din Sync’s Paul Barker announced plans to release his upcoming RE-808 design as an open source project:

It’s funny to announce this on 909 day but it’s important news.

As many of you know we plan to make the RE-808, however the news we bring today about the project is that once the circuit boards are ready, we will release the Gerber files for them directly under an open source license. This seems to be the best model for the project under the current circumstances.

The 808 deserves a decent legacy for the 21st century and this will be it.

Gerber files are a standard format for printed circuit board designs. Making them open means that you should eventually be able to get the boards from multiple suppliers, or have them made on-off.

Details and availability info are still to come.