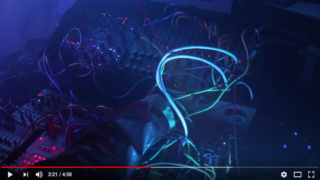 The song was was sequenced using the Squarp Pyramid sequencer and Expert Sleepers FH-1.

“I cheated a bit, downloaded the MIDI from freemidi.org and arranged it to be played back via 3 main voices and an improvised drum track,” Anderson explains. “The bass line is composed of two WMD/SSF Spectrum oscillators being summed and running into the Rossum Electro-Music Evolution filter. The lead is all the WMD Synchrodyne with it’s expand. Using the Synchrodyne for the lead voice gave the tune a unique flavor as it has a sound that is all its own and even sounds a little ‘vocal’ at times.”

In addition, the pads were the Roland Juno-106 sequenced via MIDI from the Pyramid. The kick drum and hi-hats are samples being played on the Rossum Assimil8or and the rest of the drums were covered by the WMD Chimera and two Fractures.

Anderson adds, “The main performance aspect was controlling filter points, envelope lengths, as well as improvising the drums with the WMD METRON trigger sequencer prototype, and just being a goofball with some stage lights, lasers and too much fog. It was a fun, silly video to make.”

You can see more of Anderson’s work on Instagram at @NastyNachos, and find out more about the WMD instruments used in the video on the WMD website.