Ableton Loop 2018, held Nov 9-11, 2018 in Los Angeles, California, was an exploration of passion, mastery and ecstasy in music making.

The event, described by organizers as ‘A Summit for Music Makers’, happened in the US for the first time, and offered three+ days of presentations, discussions, performances, workshops, meetups and more. The activities were spread across four main locations: the Montalbán Theatre, EastWest Studios, the Ivar Theatre & IO Music Academy.

Most of the performances and discussions were open to everyone, but there were also smaller group sessions and workshops. We attended Loop 2018 as press, so our discussion here focuses primarily on the events that were open to everyone. But attendees could also register for one of a wide variety of Studio or Listening sessions and a Workshop session. 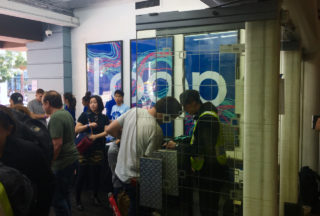 The Montalbán Theatre was the heart of Loop 2018. The venue features a large old-school theater, where the event officially kicked off and concluded, and has a rooftop lounge with a great view of the city.

The theater is named after actor Ricardo Montalbán, but has a history going all the way back to 1927. While the seats are not upholstered in fine Corinthian leather, the venue offers a modern theater experience, while retaining its vintage Hollywood elegance. 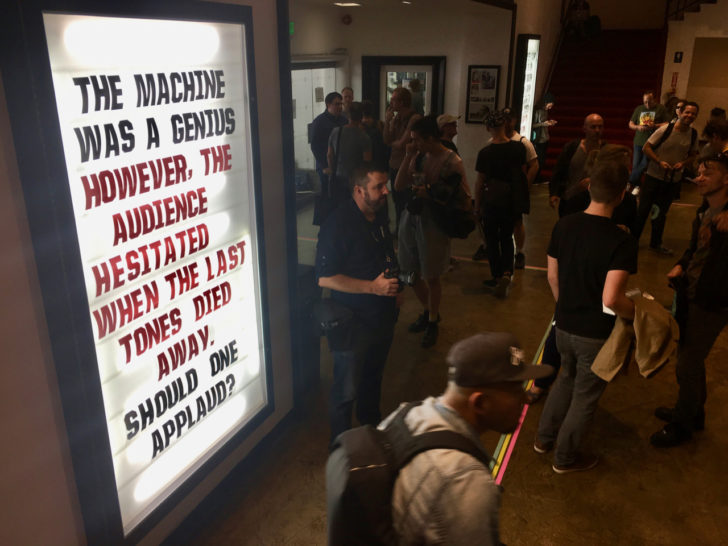 The event kicked off on Friday, Nov 9th, with a welcome by author and composer Dennis DeSantis, Head of Documentation at Ableton.

Over the next three days, the Montalbán was the home for dozens of presentations and performances.

Every day, Loop offered a ‘5 Takes’ session, each of which featured 5 people, each giving a 15-minute talk on a topic that they are passionate about.

In one of the ‘5 Takes’ panel discussions, poet, artist and educator Toni Blackman gave a powerful talk on her experiences creating room for women in hip-hop.

Blackman talked about organizing cyphers – gatherings where performers can hone their rapping and freestyling skills. And she talked about creating ground rules and challenges for attendees, designed to elevate their lyrical and improvisational skills. 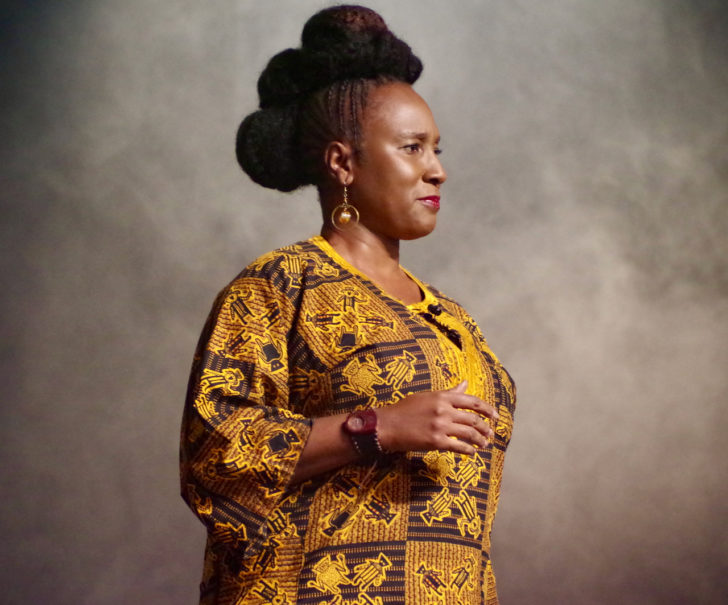 Patrice Rushen is a classically-trained artist who has found success as a jazz pianist, composer and music director: 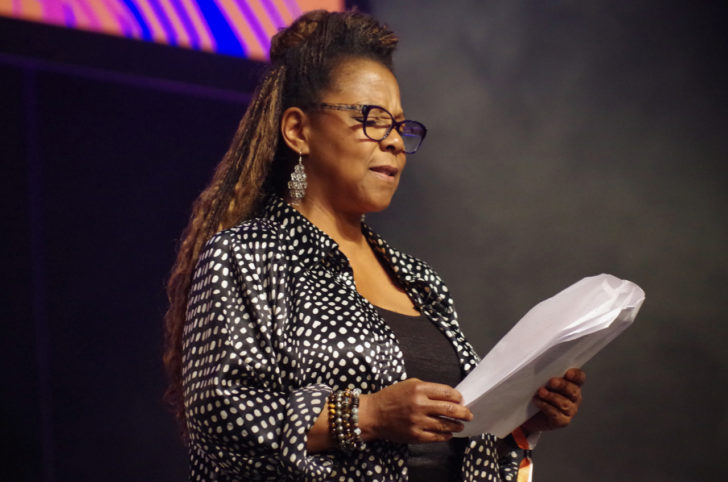 In her 15-minute talk, she discussed the life experiences that shaped her musicianship and shared her thoughts on inspiring future generations.

Abid Hussain brought a unique range of experience to his fascinating interactive demonstration about law and music. Hussain is a licensed attorney, an Ableton Certified Trainer and has produced 14 albums.

Music and the law is a complex subject, but in 15 minutes, Hussain managed to highlight some of the most important recent music law cases; discuss some of the key legal concepts relevant to music production; and demonstrate transformative use of samples using Ableton Live: 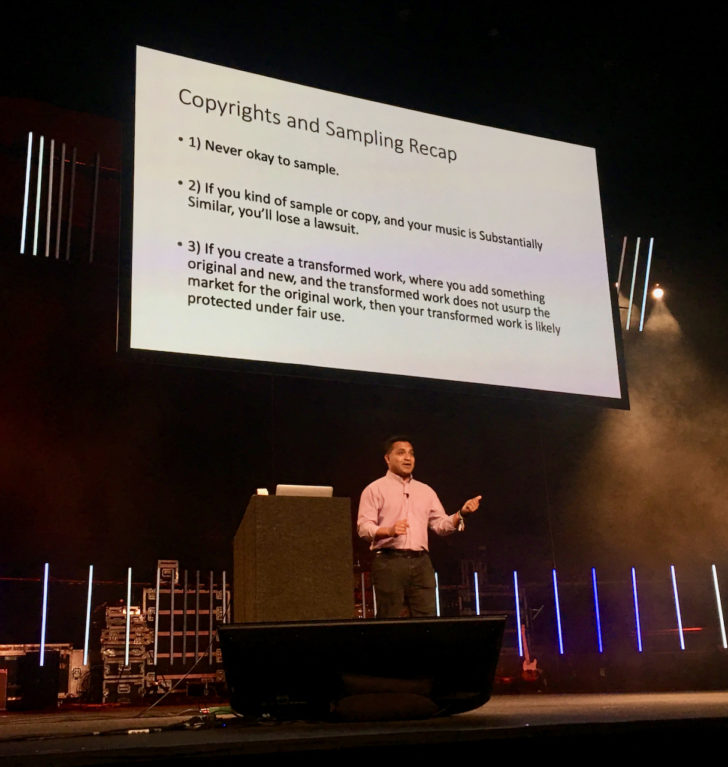 The Montalbán Theatre was also home to several presentations that explored the technical mastery that underlies great music and multimedia performances. 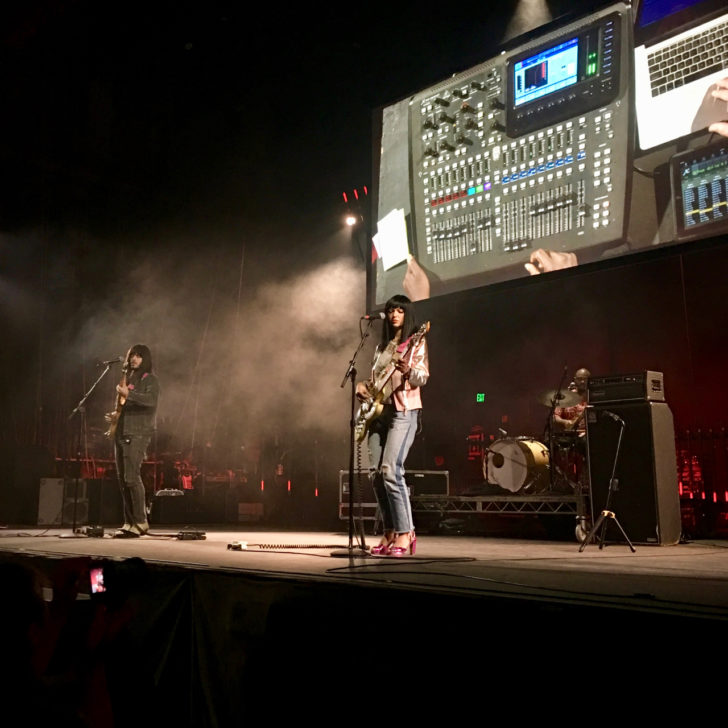 The session started with a short discussion of their influences and how they work. It followed this with a live performance, with Brown adding dub-style effects and reacting to the band’s performance – and the band reacting to Brown’s ever-changing effects work.

The session put a spotlight on live mix performance, literally and figuratively:

In another performative presentation, Lafawndah (Yasmine Dubois) created an otherwordly, ecstatic electronic performance and discussed how music, lighting and design can work together to create something that transcends technology:

Each night also featured an evening performance at the Montalbán Theatre.

On Saturday, Loop 2018 featured Jamaican music production collective Equiknoxx. The five-piece group creates dancehall music, built on a bed of found sound samples and electronic sounds, resulting in a sounds that’s as experimental as it is danceable.

Smith performed her 2017 album The Kid, using a laptop, modular system and vocal processor. The performance ranged from delicate and intimate moments to an almost overwhelming barrage of color and sound.

In addition to the main theater, the Montalbán features a rooftop patio, where you could relax, get a drink and enjoy a great view of the city.

It quickly became a favorite spot to catch up with old friends or to meet new ones.

Loop organizers made thoughtful use of the roof lounge space and the way sound was amplified, so you could sit close to the stage and be surrounded by sound, or sit outside the main performance area and still be able to have conversations.

One of the highlights of the rooftop performances was an evening modular performance by Richard Devine:

Devine prepared a set specifically for Loop, focusing on the more ambient and textural side of his work. He performed his hour-long set underneath a light installation, BEAD, by LightRiders, that undulated with colorful effects and a view of the city that seemed a bit Los Angeles, 2019.

The second main venue for Loop 2018 was EastWest Studios – a legendary studio where Marvin Gaye recorded Let’s Get It On, scores from The Godfather and Battlestar Galactica were recorded, Michael Jackson and Quincy Jones recorded Thriller and Sinatra recorded My Way.

The venues were all in close proximity, just a few blocks’ walk from one to another, and Loop organizers made navigation easy with signs on the sidewalks: 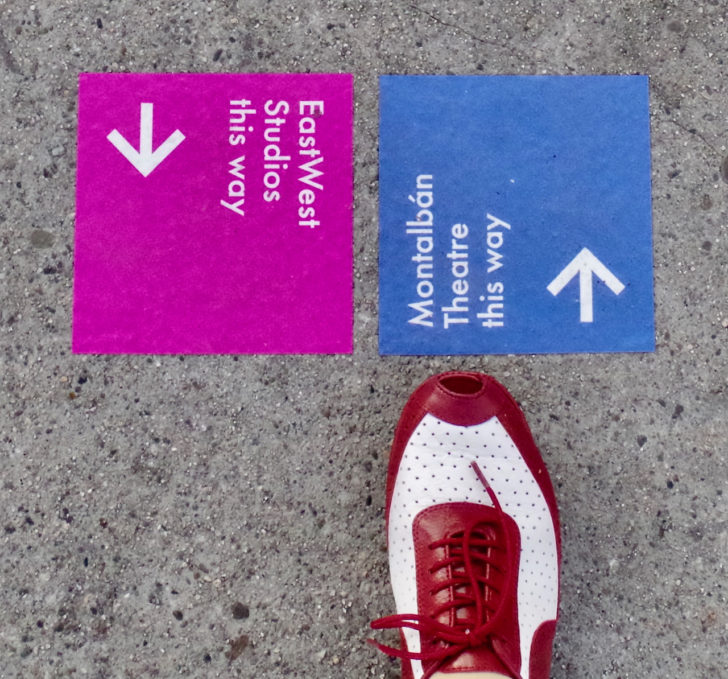 One of the discussions we were able to catch offered a look at creating hybrid physical-digital music instruments:

The panel discussion, hosted by CDM’s Peter Kirn, featured three people who have created new types of instruments: Dr. Astrid Bin, who demonstrated her family of electronic percussion tubes; Stephanie Cheng Smith, who demonstrated an electro-acoustic bell instrument that could be sequenced or played interactively; and Dan Moses, who makes new types of instruments which are based on physical modeling synthesis.

A third location, the Ivar theater, was the home for Loop’s Maker Zone, an interactive installation and more: 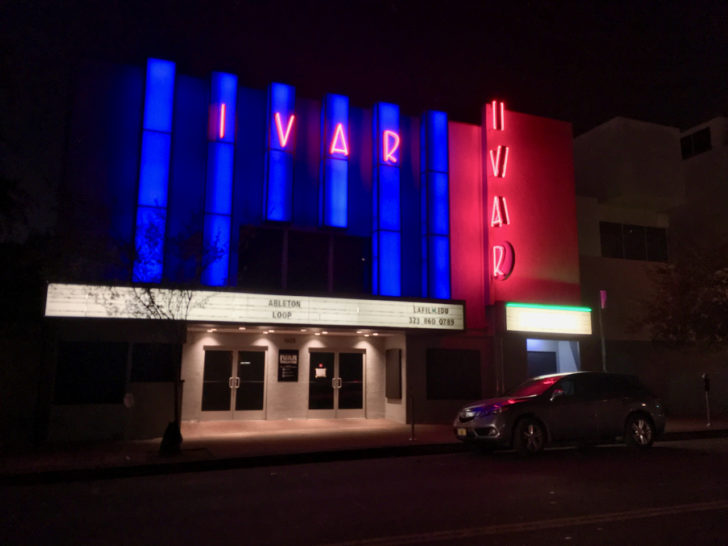 We caught sessions at the Ivar by Brian Funk (AfroDJMac), who gave a great presentation on making custom instruments in Ableton Live, using stuff you already have; and Pierre-Antoine Grison (Krazy Baldhead), who discussed his State Of The Loop MIDI looping controller for Live. 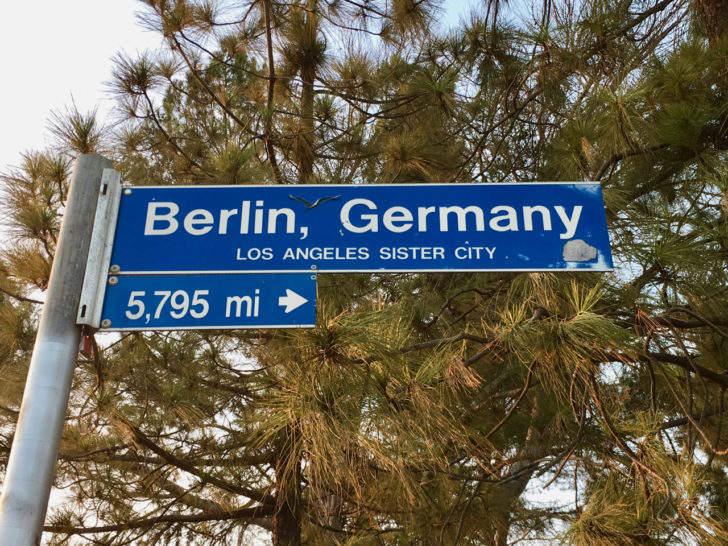 Loop 2018 was the first time that Ableton held the event outside the company’s home town of Berlin.

And, while Berlin is an ideal place for an event like Loop, bringing the event to its sister city of Los Angeles made the creative summit more accessible to many people and also made it possible for organizers to invite more artists and experts from the Americas.

Loop 2018 was held in the center of Hollywood and you could even see the iconic Hollywood sign from the event hotels and venues:

The neighborhood meant that there were lots of interesting placed to go and things to do outside of the Loop event schedule, including great restaurants, record stores that were open late into the night, a farmer’s market on Sunday and tasty street tacos. The nearby Amoeba Music – the world’s largest independent record store – is a music lover’s mecca, and also was home to several DJ events during Loop. 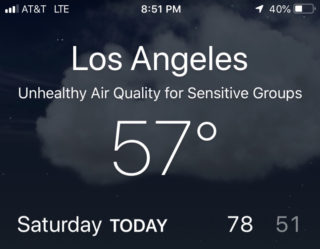 LA also created some unique challenges for the Loop organizers.

2018 has been one of the most destructive wildfire seasons on record for California. And, while the fires were not a direct threat to the event area, on Saturday, the fires resulted in air quality warnings for Los Angeles.

The mid-afternoon sky in LA had a yellow cast to it and a scent that alternated between burning wood and flaming tires: 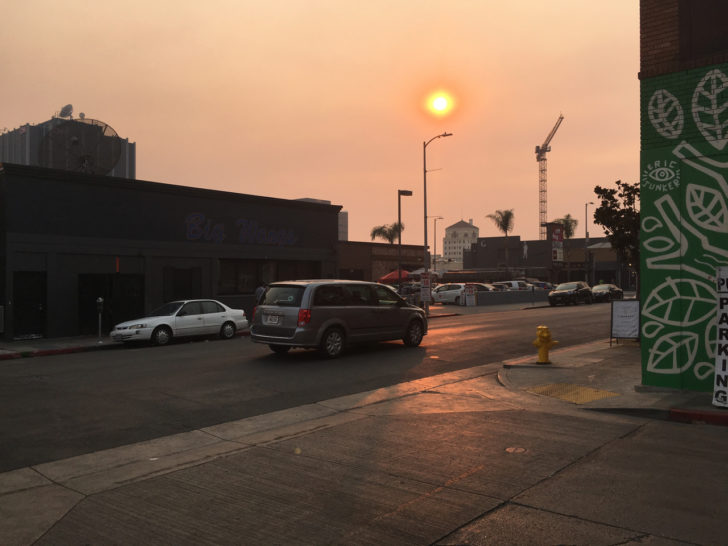 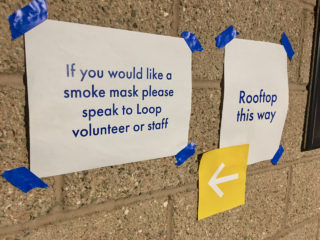 Loop organizers did an impressive job of responding, though, quickly sourcing breathing masks and making them freely available to attendees. They distributed the masks at the entrances to venues and put up signs to alert attendees going to the rooftop at the Montalbán.

The change in location had a tangible effect on the vibe of the event, because between sessions you found yourself hanging out with new friends on the roof, talking about the great session you just attended, instead of huddling in the halls of Berlin’s Funkhaus.

The change in location also seemed to encourage thinking outward – collaborating with other musicians, exploring the advantages of working in a studio, or even working and performing outside.

Organizers haven’t announced plans for future Loop events yet, but we’d love to see future events alternate between Loop’s Berlin home and traveling to other locations. Berlin seems like the natural location for Loop and makes it possible for the conference to have a very international scope, while traveling to other locations opens the event to exploring other types of music and music making.

Though we’ve gone into a lot of detail about our own experiences at Loop 2018, the event offered so many options that each attendee could have a very unique experience. If you’re interested in attending a future Loop event, we’d encourage you to take a look at the Loop reflections of hardware builder Nicole Equerme and music professor Ethan Hein, who have different backgrounds and perspectives on the event. And there’s an unofficial Ableton Loop Community on Facebook, where attendees share their experiences, collaborate and help each other out.

Did you make it to Loop 2018? If so, let us know about your experiences in the comments!

5 thoughts on “Ableton Loop 2018 – An Exploration Of Passion, Mastery & Ecstasy In Music”