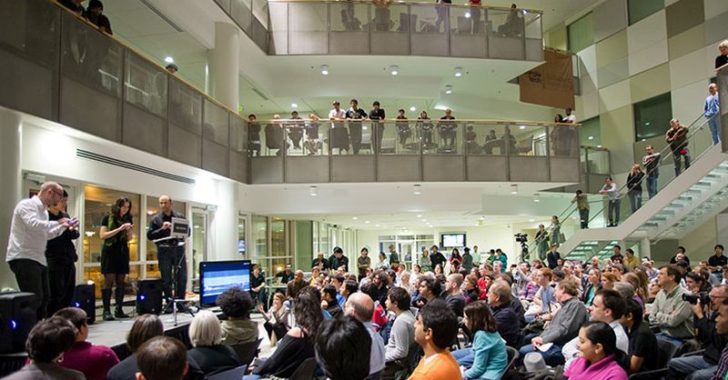 The Georgia Tech School of Music has announced winners of the 2019 Margaret Guthman New Instrument Competition, the World Cup of musical instrument design.

Fourteen finalists met March 8-9, 2019 at Georgia Tech’s Ferst Center for the Arts to compete in front of a standing-room-only crowd. Each inventor had the opportunity to perform on stage in front of the capacity crowd. Judges Pamela Z, Roger Lynn and Ge Wang selected the winners, and the audience selected three People’s Choice Awards.

First place in the competition went to Keith Groover and The Glide – a melodic instrument built around an accelerometer. The use and manipulation of acceleration changes the volume, tone, pitch, and attack, while a small handful of buttons select the initial pitch, legato, and transposition.

The Glide has been designed with accessibility in mind, so that ‘a wide range of people are able to play it regardless of physical ability, financial means, or prior musical knowledge’.

Second place in the competition went to Wizdom Music and GeoShred.

The AirSticks are designed to combine the physicality of drumming with the possibilities of computer music. Using innovative software, AirSticks transform the 3D space around the user into a playable area.

The Spinstruments are programmed to play different sounds, in response to various types of movements. As a result, performances blend choreography and music.

Details on the 2019 Margaret Guthman New Instrument Competition are available at the Georgia Tech site.