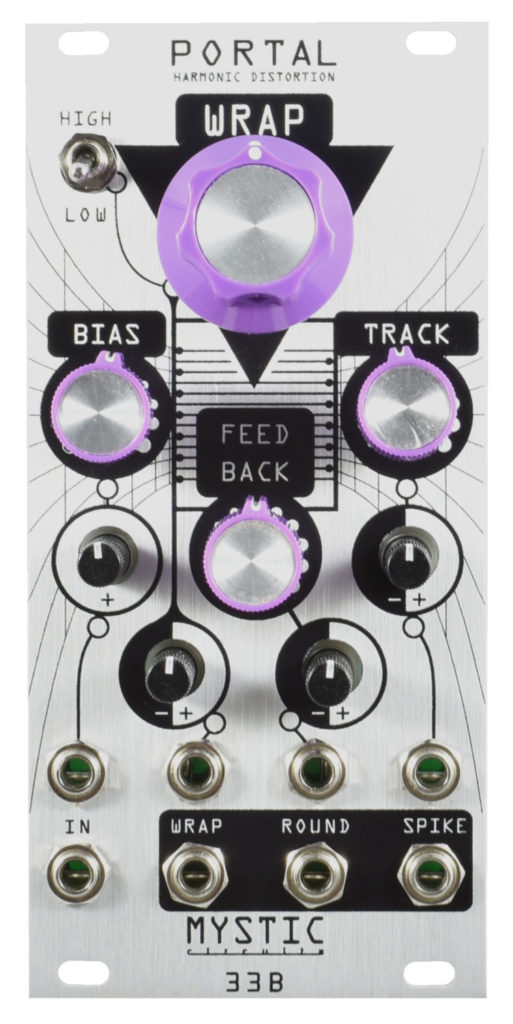 Similar to a wave folder, the Portal module multiplies the harmonics of a signal going through it. Unlike a wave folder, once the input has hit the threshold voltage, the output will jump to zero instead of folding back on itself, creating a sharp transition almost like the wave has traveled through a portal.

When fed with a triangle or sawtooth wave, the module can create an effect similar to oscillator sync, but without the need for a second modulating oscillator. When fed with complex audio sources, the results are “devastating,” turning just about anything that goes through it into “mad screams from another dimension.”

In addition to the normal “Wrap” output, the “Round” and “Spike” outputs give alternate types of distortion, based on the main wrapping algorithm. “Round” is similar to a bit-crusher or voltage quantizer, but achieved completely with analog circuitry, whereas “Spike” creates a sharp voltage spike whenever a new wrap is made. All four front panel parameters are voltage controlled with dedicated attenuators or attenuverters to further sculpt all three outputs.

Four voltage-controllable parameters each, with a dedicated attenuverter or attenuator: