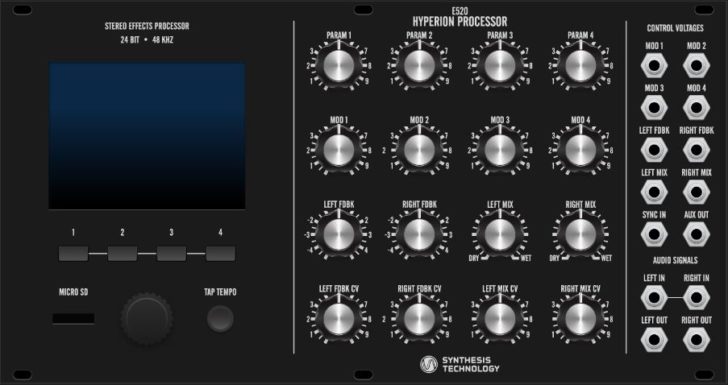 The E520 Hyperion is a mono/stereo in, stereo out effects module. Powered by a 480MHz ARM Cortex M7 CPU, the Hyperion has 64MB on on-board SDRAM for recording up to 6 minutes of stereo audio, at 48KHz sample rate.

The Hyperion’s algorithms fall into 3 categories: 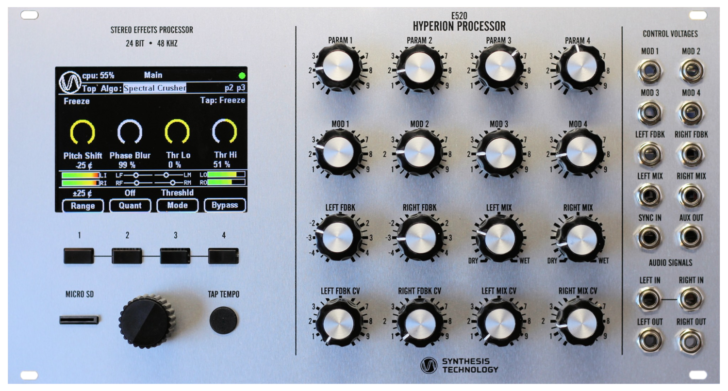 There are 25 effects algorithms included with the E520, with the capacity for more to be added in the future, as internal memory allows.

Each algorithm can have up to 4 PARAMETERS under voltage control. The initial value of a PARAMETER is set by a panel knob, and then external CVs of up to +-5V at 10KHz can be applied. Most algorithms can also employ feedback which can be modulated by external CVs as well. Typical PARAMETERs are delay time, LFO speeds, pitch shift amount among others.

The Hyperion promises to offer effects capabilities that go beyond most current Eurorack/modular effects modules, based on the Spin FV-1.

“Unlike the current Spin FV-1 parts, now over 6 years old, our 480MHz ARM H7 can do both time and spectral effects,” explains SynthTech founder Paul Schreiber. “You no longer need a PC or Mac to run these spectral algorithms. An example is the former NI Spektral Delay, which we can implement in a slightly different way, mainly our UI with a small LCD.”

Schreiber has developed the module with a core team that has previously worked on SynthTech’s E370 and E352 modules: Schreiber, DSP coder Eric Brombaugh, and composer & synthesist Robert Rich.

“I also have a large team, about 15 people, who will be beta testers and providing demos,” adds Schreiber. “One early beta tester is Russell Brower, [who is] the former head composer at Blizzard (World of Warcraft) and before that, [was] at Disney.”

SynthTech has announced a variety of effects for the Hyperion:

Spectral effects are processed in the frequency domain using the Fast Fourier Transform. All spectral effects in the E520 use a 1024 point complex FFT to provide two x 512-point real transforms at a rate of 2.7ms which provides a good compromise between time and frequency resolution, while allowing full stereo processing for most effects. Frequency resolution is 512 bins of 48Hz each.

Schreiber says that he expects the Hyperion’s capabilities to grow over time, similar to some of his earlier modules. “Like both the E352 Cloud Terrarium and E370 Quad VCO, the E520 Hyperion uses the same, easy and quick (now under 3 seconds) firmware update system. The E370 Quad VCO, in particular, is very different now, 2 years after release, than what was presented during its KickStarter.”

“We expect and encourage our early KickStarter customers to suggest algorithms to include,” he adds. “We feel this new H7 hardware platform has enough memory and raw CPU speed to allow years and years of upgrades, always free and with a lifetime warranty.”

Pitch Shifter: voice in, then pitch-shifted +400cents, then -300cents.

Looper: Source is lap steel guitar, play by Robert Rich (some reverb on original). Using the Looper with some subtle, then not so subtle pitch shifting (especially the very end).

A more comprehensive selection of audio demos is available at the SynthTech site.

Production of the SynthTech E520 Hyperion Stereo Effects Processor is being funded via Kickstarter project, and it is available to project backers starting at $539 USD. See the project site for details.