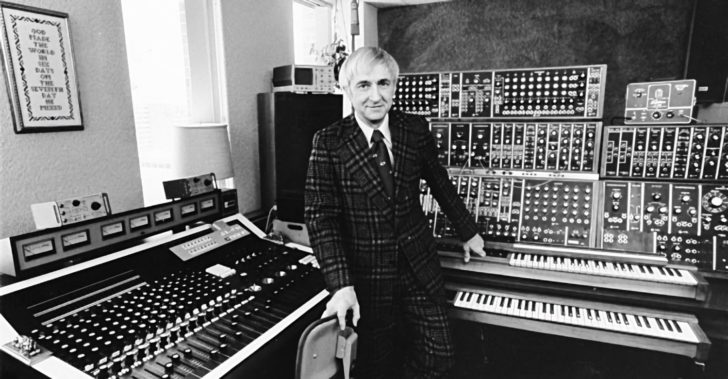 If you’re a National Public Radio (NPR) listener, you’re familiar with the music of composer Don Voegeli, above.

In the 1970’s, Voegeli was a University of Wisconsin-Madison professor and the music director at WHA (now known as Wisconsin Public Radio). Voegeli had composed music for commercials and television, and was asked to write the theme song for the Corporation For Public Broadcasting’s first daily news program – All Things Considered.

Voegeli turned to the then-futuristic sound of synthesizers, composing and arranging music for the show in his Electrosonic Studio.

Within just a few years, the show had grown and producers wanted a more iconic theme. And Voegeli created a jaunty ‘switched-on’ theme for the show:

They don’t make ’em like this anymore – NPR listeners have heard Voegeli’s theme in orchestrated versions for decades.

After Voegeli retired in 1982, WHA auctioned his equipment off. There are no records of where the instruments went. Wisconsin Public Radio’s Maureen McCollum tells the story of the search for Voegeli’s lost instruments below:

The hunt for Voegeli’s VCS 3 and Moog synthesizers has ended up in a dead end, but a few later synths were purchased by composer and sound designer Tom Naunas. You can see some of Voegeli’s instruments at the Wisconsin Public Radio site.

Unfortunately, where the rest of Voegeli’s Electrosonic Studio ended up is still a puzzle. If any readers happen to have additional information, you can contact Wisconsin Public Radio via their site.