The documentary will be streaming from the foundation’s Facebook page at 2:30 pm Eastern(US)/ 18:30 UTC. 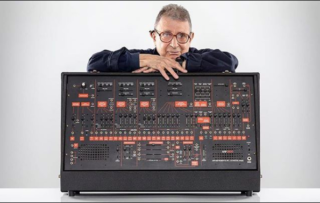 “[This Saturday is] the long-awaited premier of Alex Ball’s documentary: Electromotive:The Story of ARP Instruments.

“Last May, Alex Ball contacted me, asking me very politely (no obligation) if I would “if it would be possible to ask you some questions about your father and about the ARP story in general?”

“Little did I know would lead me to this place; that nearly a year later, after an “odyssey” of explorations, introductions and reconnections with people I hadn’t seen or spoken to in 4 decades I’d be able to announce the world premiere of a documentary that completes one of personal goals I had when I started the Foundation. I had wanted to tell the story of ARP in a way that displayed the successes, skills, talent and vision that my father had, and that was emulated by a group of passionate engineers, technicians, employees and musicians.

“[Director] Alex Ball himself is a rare person, kind, intelligent, funny as hell, tireless in his pursuit of a story and talented to boot.

He has put together an amazing documentary, and in the midst, connected people across the globe in a creative collaboration.

The documentary’s premiere coincides with the Alan R. Pearlman Foundation being granted the non-profit (501(c)(3) status they’ve been working on over the past year. The official nonprofit status means that donations are fully tax-deductible (retroactive back to June 14, 2019).

The Alan R. Pearlman Foundation is also now able to apply for government and foundation grants, which will further broaden its access to resources and strengthen its ability to serve students that are seeking a degree in synthesizers, electronic music and electronic engineering.

The ‘Electromotive‘ documentary will be available for free viewing on the following websites April 11 at 2:30 pm EST, and we’ve embedded it above: