Enrique Martinez, aka Ricky Tinez, is well known to synthesists, through both his work as a product expert for Novation and his series of in-depth synth videos on Youtube.

But he’s also recently gotten a taste of scoring for film. And not just any film, but one of the biggest films of the last year, Star Wars: The Rise Of Skywalker.

And it started with a hat, an email and a shared love of synths.

We talked with Martinez and asked him to tell us the story of how his love of synths led to scoring a track for the latest Star Wars movie.

Synthtopia: So, we were watching the latest Star Wars movie, sitting through the credits and listening to John William’s last score for the series, and we see ‘Ricky Tinez’ scroll by in the soundtrack credits.

We only know one Ricky Tinez, so we had to find out how you got involved with the soundtrack.

Ricky Tinez: All right, so I was driving home from work and I see a little pop-up for my store on my phone, and it says, “Order from JJ Abrams.”

And then I get home and I was like, “Oh right, I’ve got to ship that order out.” Then, I was like, “Oh, it’s going to Santa Monica. Oh, this is the front for Bad Robot!”

So I thought, “I can’t just ship JJ a hat, like no big deal. So I wrote him a letter. And spelled my email wrong, like a loser.

Ricky Tinez: I know! I didn’t even realize it.

The worst part was I wrote the note twice. I bet the first time it was spelled correctly. I sent it off and a couple of days later, he gets it and finds my email through my Bandcamp.

He hits me up in there.

Synthtopia: So he was persistent.

Ricky Tinez: He was just like, “Hey man, you spelled your email wrong. But thanks for the hat.”

I was leaving to London, at this time, for the pop-up shop (a Novation event). And we just chatted a lot and just connected. We’re just nerds. That’s literally it. It’s just like talking to another one of my buddies. He goes way back with synths, too.

And so, when I come back from London, I hit him up. We’re just chatting, texting back and forth. “Oh, did you hear about this synth? Do you have one of these? Have you messed with this?”

And even during that, I was just like, “Dude, don’t you have a movie to finish? Stop texting me. Let me leave you alone.”

Synthtopia: So he can finish Star Wars.

Ricky Tinez: Like, “You kind of have a lot on your plate, man.” That guy’s busy!

He stays busy, and he’s so inspiring to be around because I thought I had a lot of stuff going on! And J.J. Abrams is just the most chill, cool, down to earth guy. He has a billion plates spinning all at once, and just still has the time to be like, “Hey, how are you doing?”

So I floored it all the way to Fox and from there, we just started jamming and we had a lot of fun. He was like, “Bring a synth.” I took a Novation Peak. He had a Roland MC-707 there. It was the first time I ever used one.

And it was so funny, because he left the room like, “Oh, I’ve got to go do this thing really quick. I’ll be right back.” I was like, “Okay.” As soon as he leaves, I hit up my buddy, Peter Brown, from Roland. I’m like, “Dude, how do I use an MC-707?” I’m there slapping the thing, trying to figure it out. Because I was just like, “Aggghhhh,” like panic.

It was a song for Star Wars, it was intense.

Synthtopia: So you’re calling up Peter and saying, “Give me everything I need to know about the MC-707.”

Yeah, so JJ and I just jammed all day and then hung out and talked about gear. And we’re like, cool, we’ll work on this.

And this was the beginning of November, I’d say just about, we were working on the song. After that, we just jammed for a while and then we just started sending sessions back and forth.

I think they had five, six ideas by the end of it all. But it was super fun.

Synthtopia: Did you know that you’d be writing music for a scene that actually had Star Wars composer John Williams in it too?

Synthtopia: That had to be just wild.

Ricky Tinez: Yeah. That was the crazy part too, because at first it was like, “It’s just a bar scene.” I was like, “Okay, cool.” And then JJ’s like, “Well, this is the first time John Williams has ever had a cameo in the movie, so we can’t just use regular Cantina music. We need to signify that the scene is different.”

The significance of this song for the bar scene and for who’s in it, which is another crazy inspiring thing. Yeah, wild times.

Synthtopia: So we were at Flix Brewhouse, before the pandemic, having a brew and watching the movie. And we sat through the credits at the end like soundtrack nerds. Suddenly we see, ‘Ricky Tinez’ scroll by, and we’re like “That’s Enrique! What the hell?”

So what did you think when you actually saw the movie and saw your name in the credits?

Ricky Tinez: It was definitely a trip. The whole entire time, even after we’d finally come up with the final name, I was thinking, “You never know what can happen.”

Just the opportunity to hang with JJ, and be around him and make music with him, is more than enough. I thought, even if my name doesn’t make it into their credits, I am just beyond honored to even have this opportunity.

It’s mind blowing. I was fine from the second he sent an email back. I was like, “Cool.” So everything after that was just incredible.

Going to the premiere was weird. I was just like, “Oh, my god.”

Synthtopia: You got to go the premiere?

Synthtopia: So where was it?

Ricky Tinez: On Hollywood Boulevard, at the Chinese Theater. They closed off the whole street, and set up all this crazy Star Wars stuff.

Ricky Tinez: That was really cool too. It’s like mega fans and then, there were people who were in the movie and all this cool Star Wars-based stuff, and people giving out lightsabers and stuff like that. It was crazy.

Ricky Tinez: I’ve always been, you know, super nerd, love Star Wars. So that happens, and even then I’m just like, “You never know. You never know.”

Even after getting emails from Disney being like, “Hey, this is how your name is going to be in the credits. Is everything spelled right?” But I’m still like, “You never know. Anything can happen.”

So yeah, then the movie comes on and then they go through the scene, and I’m like, “Oh my God. Oh my God.”

It was just so, so weird. Because seeing the scene and hearing the music, I remember what I was doing at that moment in the song on my gear to get the sounds and stuff that we’re playing, but I’m also watching Star Wars at the same time.

So it was just like this weird experience of watching and seeing that. But then overlaying my hands and stuff on the gear going through.

Ricky Tinez: Yeah, like, literally, I remember what I was doing in the parts of the song that were playing, which was really cool.

Watching it on screen, I was like, “Oh my God, that is so cool.” So that part was just like, holy crap. And then, yeah, the rest of the movie was insane and so good and awesome. And then seeing your name in the credits was super wild.

We started talking in October, and the movie was out mid-December. It was so wild. Super wild. I still don’t get it!

Synthtopia: So what all did you play on the track? Did the MC-707 end up on there?

Ricky Tinez: No, I don’t think we ended up with that. We did end up with some Kijimi in there, the Kijimi from Black Corporation.

We had to, since the scene was set on the planet Kijimi. JJ did a lot of the sounds. I sent him some Kijimi sounds, I think there might be some Deckard’s Dream in there as well.

He did a lot of more of the sound stuff, I did more of the arranging and then the mangling, to make it sound a little bit more like old bar from a planet, [laughs] from a galaxy long ago, far away. 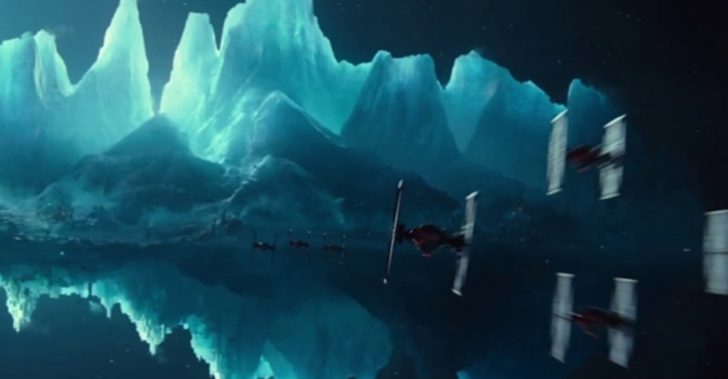 I tried to imagine – what does that place and time mean when it comes to music? Because you want to imagine… How do you make music for technology that doesn’t exist? What would a musician in that world use?

What’s the genre, then? So yeah, it’s just a bunch of wild things!

Synthtopia: Do you think that there’s chance that this will lead to new things for you? Have you ever had your music in a film before?

Ricky Tinez: Not necessarily. I’ve helped friends out that are making movies and stuff like that, because I’m making music anyway. Might as well just let somebody else use it.

But yeah, if that would happen, to be honest, it would be great. Even considering the fact that I’ve been able to just jam with JJ. – somebody like him, who’s been into synths forever. He’s a mega nerd, an inspiring person.

Synthtopia: So we know JJ Abrams is totally into synths and electronic music. In his TV series “Alias,” there was a group of evil masterminds called the ‘Prophet 5’, and now there’s a planet ‘Kijimi’ in the latest Star Wars.

He’s probably sneaking stuff in all over the place, like Easter eggs for synth nerds.

Ricky Tinez: There’s another Easter egg in the movie.

Ricky Tinez: But I’ll just leave it at that.

Synthtopia: Leave it at that. So we’ve got to look for that then, huh?

Ricky Tinez: It’s a visual cue, I guess. I can’t say anything.

Synthtopia: If you watch old Star Trek: The Next Generation shows, there’ll be things that are clearly drum machines and things like that in the control panels, like it’s like running the ship.

They reuse anything that has lots of knobs and buttons on it. There was some movie recently that had a Launchpad.

Ricky Tinez: There was a TV show with a Circuit in it.

Ricky Tinez: It was hilarious. They were putting someone on the execution chair. And they hit something on the Circuit and then turn the filter knob up, and the guy just starts trembling in the chair. I was dying.

Synthtopia: Didn’t even bother changing it?

Ricky Tinez: Yeah, nothing like masking [the labels] out. And then they’re like, “Filter, up.” And then the guy gets electrocuted.

Synthtopia: Enrique, thanks so much for taking the time to share your awesome story.

And now we’ll be obsessing about catching that Easter egg in The Rise Of Skywalker!

Ricky Tinez: You have to watch it slow-mo. Quarter speed the whole time!