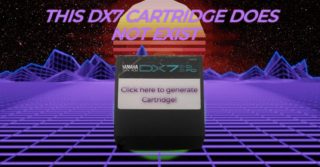 The Yamaha DX7 is one of the most popular synthesizers ever made, because it offered an unprecedented combination of polyphony, playability and pricing when it was introduced.

It also earned a reputation as one of the least user-friendly synths to create patches on, because the DX7 used an approach to synthesis that was new to keyboardists at the time it was introduced and editing was slowed by a menu-heavy interface.

While many synthesists have taken the time to learn DX style FM programming in the subsequent years, a new website promises to make creating custom patch banks faster than ever before.

The site, This DX7 Cartridge Does Not Exist, is fount of DX patches. It uses an artificial intelligence model, trained on a collection of hand-crafted DX7 patches, to create synth patches on the fly.

Here’s what the developer has to say about it:

“The Yamaha DX7 has a total of 155 parameters, the AI uses a machine learning model known as a VAE that reduces these 155 parameters down to just 8.

The model can then choose these 8 numbers randomly and map them back to the full 155 parameters of the DX7, it has learned to do this by training on a large selection of presets compiled by Bobby Blue

Each cartridge is generated in real time by sampling 32 sets of the 8 VAE parameters and compiling them together in real time. The model generates 99.9% unique voices and so it is highly unlikely that any two cartridges created on this site will be the same.”

The site generates a MIDI .syx that you can download and send to your DX7. It’s also compatible with Dexed for Linux, OS X and Windows and Rockrelay Synth FM for Android.

Rettinger’s Law – Nothing is ever a complete failure.

It can always serve as a bad example.