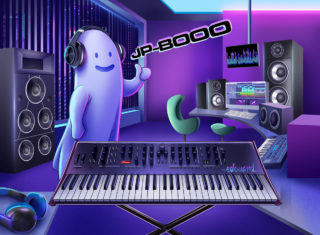 The new oscillator is inspired by the Super Saw oscillator of the Roland JP-8000, a classic analog-modeling synth design from 1996. The JP-8000 introduced the Roland’s ‘Super Saw’, which created the sound of 7 detuned sawtooth oscillators.

Developer Edouard says that, while many hardware and software synths have tried to emulate the JP-8000 Super Saw over the years, JP-BOOO addresses some of the limitations that have kept other Super Saws from recreating the original’s classic sounds. Here’s what he has to say about it:

“It is not possible to sound anything close to the Super Saw oscillator with a sawtooth wavetable, as emulations mostly do, because doing so is band-limited and lacks the aliasing that creates on the original this very bright and airy tone, thanks to a lot of additional high frequencies. JP?BOOO ? takes this into account.

The aliasing, because it creates both high and low frequencies, is selectively limited on the original oscillator by applying a high-pass filter that dynamically filters out frequencies below the fundamental harmonic frequency, leaving the welcomed high-frequency aliasing content intact. This filter generates a very distinct smooth waveshape that doesn’t look like a linear sawtooth anymore. JP?BOOO ? takes this into account.

When the Detune parameter is changed from zero to maximum, the change is not steady on the original. The frequency gap between each oscillator is not the same, it gets wider for the farthest ones, following a specific ratio. Moreover, a non-linear curve is applied so that there is finer control for the smallest amounts of detune, then it slowly becomes faster until it suddenly becomes a lot coarser at the very end. Emulations mostly have an equidistant or inaccurate spread, while they also have a linear or imprecise change curve. Also, when set to zero, a slight Detune can still be heard (with a high enough Mix). JP?BOOO ? takes this into account.

While the Mix parameter decreases the central oscillator’s volume to a bit less than half its initial value, in a linear way, as it goes from zero to maximum, it increases the six detuned oscillators’ volumes, on the other hand, in a non linear way. At the end of the range, the detuned oscillators stop getting louder while the central oscillator continues to get quieter. While emulations mostly apply a linear curve, JP?BOOO ? takes this into account.

Also, even at the same pitch, each note played with the Super Saw is different, because its seven sawtooth waveforms are not played from the start, but rather with a random phase, as seven independent free-running oscillators. You guessed it, JP?BOOO ? takes this into account.”

JP-BOOO is available now for 29,00€. Through Sunday, June 7th, you can use coupon code SYNTHFEST1 to get €10 off one oscillator or SYNTHFEST2 to get €30 off two oscillators.