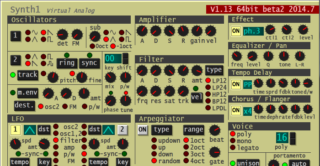 Developer James Skripchuk has created a new site, This Patch Does Not Exist, that uses AI to generate banks of patches for Synth1.

“Synth1 was one of the first plugins I downloaded when starting to make music. Its versatility lies in its simplicity – and a massive collection of user generated presets. So as a CS person who’s interested in the fusion of machine learning and music, who could ask for a better dataset?

This project was heavily inspired by Nintorac’s This DX7 Cartridge Does Not Exist. Make sure to check that out also!

I used a Generative Adversarial Network (GAN), which is essentially making two neural networks fight against each other for our own benefit.

The names are generated from a Recurrent Neural Network (RNN) based off of the synth parameters. There’s a lot of duplicates however, further training and model finagling is needed.”

You can preview examples of the AI-generated patches below:

See the site for details.

We are the music makers… and we are the dreamers of dreams.