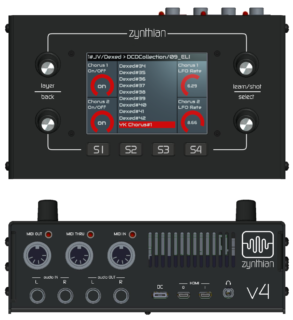 Developers of Zynthian – an Open Synth Platform – have announced version 4 of their DIY synth kit.

The Zynthian is a hardware synth, based on the Raspberry Pi minicomputer, that can run multiple synth engines, filters and effects.

Zynthian Kit v4 keeps all the good things from the v3, but integrates the Raspberry Pi 4, which substantially increases the Zynthian’s processing power.

The RBPi4 allows to run all the synth-engines without reaching the limits. No more “clicks” (XRuns) when playing Pianoteq, OBXd or ZynAddSubFX. You can also play simultaneously more layers, which comes in handy when using the ntegrated step sequencer, ZynStep.

There’s no religion but sex and music.