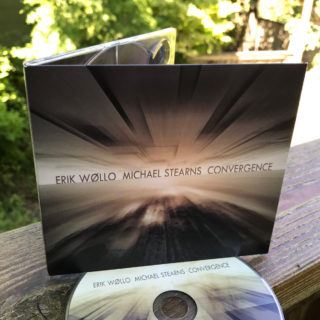 The album, Convergence, is the debut collaboration between Stearns & Wøllo. Stearns released a series of seminal ambient electronic albums, starting in the late 1970’s, including the classic Serge modular album, Planetary Unfolding. But Stearns is probably best known for his soundtrack work for films like Ron Fricke’s Chronos & Baraka.

Wøllo has a series of solo albums, along with collaborations with a who’s who of ambient electronic artists, including Steve Roach, Ian Boddy, Byron Metcalf and others.

Convergence is described as “a subtle interplay between the two artists’ styles, blending naturally into expressive reveries that venture into dark mystical terrain as the album progresses”.

“It became obvious when working with Michael that the music would reflect a very visionary and vast landscape. During the album sessions, I had a dream about the music and about an expedition into a totally unexplored endless, surrealistic desert-like territory,” notes Wøllo. “Inspired by this dream, we named some of the album tracks for these visions. And it ended well; the last piece on the album is calm and melodic, reflecting memories of the travelogue that yields new, positive and open doorways.”

You can preview the album below, or via their Bandcamp page: