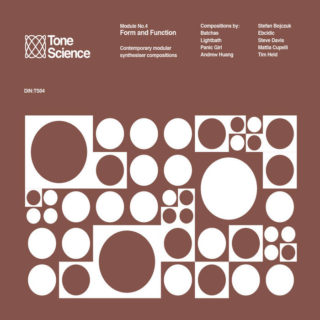 Synthesist and DiN label head Ian Boddy let us know that they’ve released Tone Science Module No.4 Form and Function, the latest in their ‘Tone Science’ series, exploring the world of modular synthesis.

The Tone Science series has evolved into a tour de force showcase of synthesis. It has featured a who’s who of synthesis, while also introducing some artists that many listeners will be unfamiliar with.

Like the previous albums in the series, Tone Science Module No.4 brings together tracks from synthesists with a variety of backgrounds. Boddy says that he’s carefully selected the tracks featured on each album in the series so that they create create a coherent whole.

“One of the challenges for Boddy in compiling the Tone Science albums is to get the track order flowing to reveal a musical structure. There’s a certain amount of serendipity in this, but for Tone Science V4 the shape of the album became very obvious early on.

Opening with the beautiful abstract forms created on a vintage Paperface Serge system by Batchas the next two tracks feature gentle shimmering & undulating sequencer patterns from Lightbath & Panic Girl that instil a sense of calm & wonder.

This leads us to the middle section of the album where first Andrew Huang gently slows down proceedings with harmonic abstract patterns before Stefan Bojczuk twists the mood with a stark, moody atmosphere conjuring up images of the isolated landscape referenced in the title of his track, Blackstone Edge.

Things start to climb up to the sonic climax of the album with first Ebcidic providing a dark & dangerous pulsing sequence followed by a crazy psychedelic melange of a track from the inimitable Steve Davis. This is followed by a sledge hammer of audio from Mattia Cupelli with huge gnarly bass & TNT percussion from which there seems to be no escape.

After such an astonishing climax the longest track on the album by Tim Held at first appears to mirror the distorted tones of the previous track before a sense of calm ensues and the album finishes with a final long, beautiful breath.

Tone Science Module No.4 Form and Function continues the journey down the rabbit hole of possibilities and sound worlds inhabited by artists and musicians working in this ever fascinating and varied musical field. “

You can preview Tone Science Module No.4 below. It is available via Bandcamp on CD and in digital formats.

One thought on “New Album, ‘Tone Science Module No.4 Form and Function’, A Showcase Of Modular Synthesis”