Apple has announced one of its special events for next Tuesday, Nov 10th, and is expected to introduce their first ‘Apple Silicon’ Macs at the event.

Earlier in the year, Apple announced plans to transition from Intel-based Macs to new designs, based on their own Apple Silicon. Apple has long used its own chip designs for iPhones, iPads and other devices, and has rapidly advanced them to increase their performance vs power consumption.

Now several Mac sites are speculating that Tuesday’s events will see the introduction of Apple’s fastest laptops ever.

Apple Insider is reporting that a Geekbench 5 test of an unannounced ‘A14X’ processor shows it delivering multi-core performance of 7220, an increase in performance over earlier Apple chips. 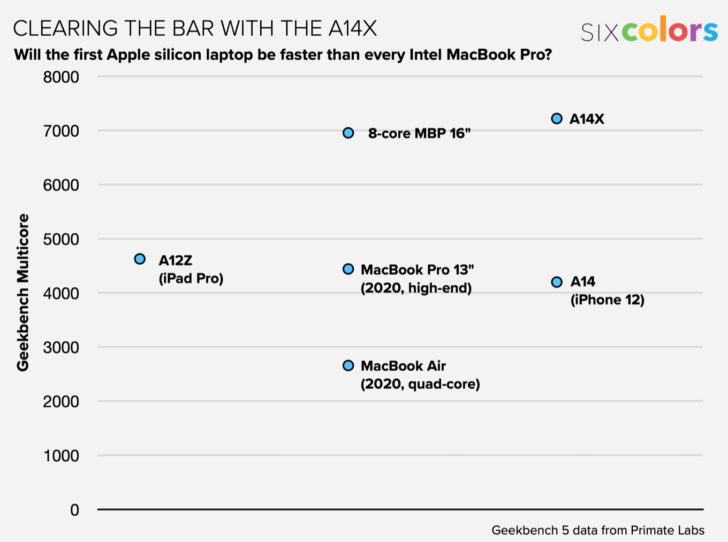 Six Colors’ Jason Snell argues that the Geekbench score aligns with expectations for the new processors, based on the performance of current Apple Silicon iOS devices:

“Whether you accept that GeekBench score as real or just extrapolate from the speed increases across the A series and the multipliers that occur when Apple adds more processor cores in its iPad-class chips, it seems highly likely that the A14X processor will be faster than every currently shipping Mac laptop.

That’s right, even a lowly MacBook Air should be roughly comparable in performance to the current top-of-the-line eight-core 16-inch MacBook Pro. (For the record, it’ll also probably be faster than all but the top-of-the-line 5K iMacs, the iMac Pro, and the Mac Pro.)”

We won’t know how Apple Silicon performs against Intel-based Macs in real-world situations for several weeks. But it’s unlikely that Apple would introduce one of the biggest transitions in their Mac line without debuting hardware that makes a compelling case for their plans.

It will take a year or more to fully understand the ramifications of this transition for Mac-based electronic musicians.

The biggest ‘pro’ is the promise of faster Mac computers and more rapid advancement of Mac hardware. The power of iOS devices has been advancing at a breakneck speed, while slower advancement of Intel processors in recent years has made it harder to justify the cost of upgrading to newer computers.

Another ‘pro’ for the transition is that all of Apple’s devices will share a common processing platform. For musicians, this means that there will be more professional level applications available for the iPad. And it will make it easier for developers of iOS audio and music software to create Mac versions of their apps.

Some have also speculated that the transition is likely to lead to more ‘modular’ Apple computers. The iPad Pro is a move in this direction, in the way that it is very usable by itself as a tablet, but can be customized with accessories for other use cases. With the transition to a shared processing platform, many expect ‘mobile’ applications to reach parity with desktop software, and for modularity to increase.

On the flip side, Mac power users are likely to be in for a bumpy ride for the next couple of years. With Apple’s previous PowerPC-to-Intel transition, the company switched its hardware over in two years, between 2005 and 2006. But it kept ‘Rosetta’, its application compatibility layer, in place until macOS Lion was released in 2011.

For most users, this made the change painless. But there were several significant ‘cons’ for power users.

A related issue was that there wasn’t a financial incentive for some hardware developers to create updated drivers for older peripherals. This increased the transition cost for many musicians, because it meant that some of their peripheral devices, like audio interfaces, had to be replaced.

Another ‘con’ of this change is that there will be a period of several years where some of your apps will not have been updated, so they’ll need to rely on Apple’s ‘Rosetta 2’ compatibility layer, which essentially lets your older apps run on the new hardware. With the PowerPC-to-Intel transition, Rosetta compatibility meant that most apps ‘just worked’, but with additional overhead that meant that they ran slower and took more hard drive space than apps that had been updated.

For users that currently dual-boot their Macs into MacOS & Windows, that option is also going away. For users that need this functionality, it will mean using virtualization software to run a virtual PC within MacOS. Using a virtual machine can be a very powerful option, but creates additional overhead that can impact performance.

Next week’s event promises to be the most significant introduction in over a decade for Mac users. For Mac musicians, Apple Silicon is expected to result in faster Macs and accelerated advancement of the Mac platform – but also some headaches and additional costs to make the transition.

What do you think of Apple’s plans for moving to Apple Silicon? Leave a comment and share your thoughts!