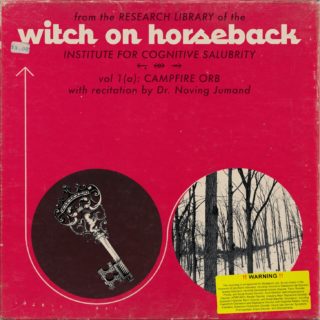 Lennon was browsing through the items at his local library sale (pre-pandemic), and came across a set of recordings by Dr. Noving Jumand. Here’s what Lennon has to say about it:

“Jumand was something of an Ithaca legend back when I first moved here in the nineties, though he’s mostly forgotten now. He’d come to town for a Cornell PhD in psychology, and was teaching as a lecturer, when he got approval for a controversial study involving the effect of narrative on human behavior. A few of his subjects—students, getting paid five dollars an hour—ended up hospitalized, and one was (and perhaps still is) committed to a mental institution.

This created all kinds of paranoid rumors about Jumand’s narratives—that they were in some way magical, or had been funded by the defense department—but it turned out that he’d given half of these students an experimental drug cocktail, derived from Phencyclidine, and this is what sent them on their dangerously dissociative journeys.

An investigation followed, during which it was revealed the the subjects knew they might be drugged and had signed release forms saying so; and the ones who were hospitalized already had histories of mental illness and drug addiction that could explain their reaction. As a result, no criminal charges were brought against Jumand—but the University cancelled his research and kicked him off campus. He eventually went on to form a quasi-utopian collective that lived in makeshift geodesic domes on some farmland outside of town, and died at 43 when he—accidentally, it’s believed—drove his bicycle off a cliff and into a waterfall.

Anyway, one extant artifact of his brief period of notoriety is a series of rare recordings of his narratives, made in collaboration with some former Moog employees he met at a swap meet in Trumansburg.

You can preview the album via the embed below or via Bandcamp: