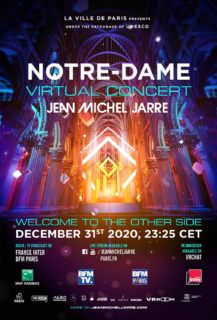 In partnership with the City of Paris and under the patronage of UNESCO, electronic music pioneer Jean-Michel Jarre has announced a free New Year’s Eve ‘concert-spectacular’, set in a virtual recreation of the Notre-Dame de Paris.

Welcome to the Other Side, scheduled for Thursday, December 31, is a free concert experience created with the intent to send a message of hope for 2021.

Jean-Michel Jarre will perform live from a studio near the cathedral in Paris, while his avatar plays inside a virtual Notre-Dame. The 45-minute concert that Jarre will perform will be comprised of tracks from his recent GRAMMY-nominated album Electronica, as well as new reworked versions of his classics, Oxygène and Equinoxe.

“Virtual reality is to the performing arts today what cinema was to the theatre in its early days, a kind of curiosity,“ shares Jean-Michel Jarre. “I believe that VR will become tomorrow, a mode of expression in its own right.”

Here’s what they have to say about the event:

“The live stream experience on December 31 will be produced as a cutting-edge simultaneously-mixed-media creation. Welcome to other side of reality, welcome into the New Year, welcome to your own personal celebration, welcome to a global party, all via your own chosen dimension:

– In total immersion on the social VR platform VRchat, accessible either simply via PC, or in virtual reality for the audience equipped with VR headsets

– Live-streaming on Jarre’s & other social media platforms via any PC or Mac, smartphone or tablet

2 thoughts on “Jean-Michel Jarre Announces Free New Year’s Eve Concert, Welcome To The Other Side”