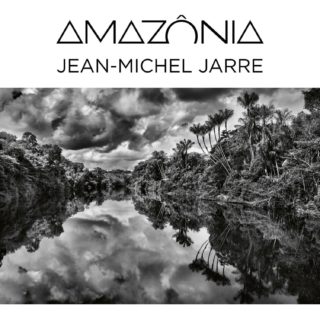 Electronic music pioneer Jean-Michel Jarre has released a new album, the 52-minute musical score for Amazônia, a new exhibit by photographer and filmmaker Sebastião Salgado for the Philharmonic Paris.

Amazônia is an immersive exhibition, focusing on the Brazilian Amazon. It features more than 200 photographs and other media by Salgado.

Jarre created a soundscape to accompany the exhibit that uses a blend of electronic and orchestral instruments, along with natural sounds.

“I wanted to avoid the ethnomusicological approach or creating background music. In the Amazonian forest, there is the dimension of nomadism; moving from one place to another, from darkness to light, from a gentle quietude to a latent threat, moving forward leaving reality behind to sink into the power of rites and dreams,” says Jarre.

“I built this music like a toolbox, made up of different sound objects, like a wandering through organic, natural, ethnic, orchestral and electronic elements, which would only pass by like in a forest that we would cross and leave behind us, temporary vestiges of a time and a space without end.”

For the Amazônia project, Jarre collaborated with the scientific team of the Museum of Ethnography of Geneva (MEG) to restore as closely as possible the sound identity of the forest and the people who inhabit it.

Jarre explains, “To represent the eternal human presence in this great green ocean, I selected incomparable sound material from the precious archives of the Museum of Ethnography in Geneva,” explains Jarre. “I composed ‘Amazonia’ in one go, day and night, in front of these photos scrolling in a loop in front of me, immersing myself in this immensity, familiar and mysterious, serene and disturbing, powerful and vulnerable.”

The Amazônia exhibition opens at the Philharmonie de Paris on May 20 and will then tour several cities around the world from Paris to São Paulo, via Rio de Janeiro, Rome and London. It features over 200 photographs, as well as films including testimonials from indigenous personalities on the need to save their culture and environment.

Jean-Michel Jarre’s Amazônia is available a variety of formats, including CD & vinyl, 5.1. Surround Sound and a special binaural version, which is available as a digital download.

The binaural version is mixed to provide the listener with an immersive sound experience. Whereas stereo sound delivers a directive left-ear/right-ear sound, binaural audio, when listened to on regular headphones, creates a 3D surround sound experience. Amazônia binaural was mixed so that the listener feels right in the heart of the forest.

Here’s a comparison of the stereo & binaural mixes: