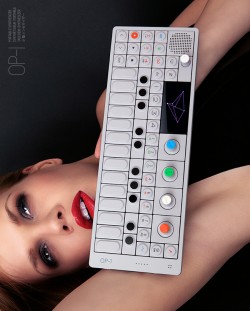 Teenage Engineering is celebrating the 10th anniversary of their OP-1 synthesizer, and has cut the price of the portable synth studio to $1,121, inspired by the device’s 2011-2021 life.

Here’s what TE co-founder Jesper Kouthoofd has to say about it:

“it all started with two prototypes. a clock radio and a synth. well, we decided to go with the synth and i guess we were right.

it was only david, me and jens back then, but we were soon joined by johan and david number two.’

i remember how we built the first prototype – an empty shell with a screen mounted on the inside. we squeezed into my honda element and drove all the way down to musik messe in frankfurt. and if i remember things right, emil was also with us at this time, but we really didn’t have a proper company yet so i guess he just joined the trip for fun.

the trade booth was just a black fabric backdrop and a table where we had placed the OP–1, under a thick piece of plexiglass. a computer under the table processed the graphics on the little oled screen.

it looked very real and the illusion even fooled ourselves as we estimated the launch just a couple of months away. (guess it was my fault, i am always a ’super-optimist’). well, it took us another two and a half years to complete it and here we are now, ten years after unit no. 01 was shipped.

the dream was to create a machine that lasted at least 20 years. we are halfway there… so big thanks and hugs to all of you. let’s celebrate ’halfway there’!”

The OP-1 inspired interest and controversy from the start, because of the way it combined a user-friendly, almost toy-like user interface with minimal design and powerful capabilities.

But 10 years later, the OP-1 is won Georgia Tech’s Margaret Guthman Award for instrument design, is part of the permanent collection of the San Francisco’s Museum of Modern Art, and is still being sold.

10 years is a pretty good run for any synthesizer or other piece of consumer tech. Or as Kouthoofd notes: “Halfway there!”

Details on the OP-1 are available at the TE site.