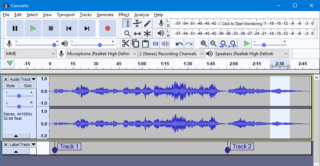 The Audacity Team has announced that they’ve updated the Privacy Policy for Audacity to address spyware concerns raised by previous updates.

The original policy, which was drafted in anticipation of the release of Audacity 3.0.3, received a large amount of media attention due to the inclusion of a few key provisions that appeared to some to violate promises we had previously made. We want to address the issues that were raised, give assurances about our intentions, and provide verifiable proof of what information is actually sent from Audacity.

The new privacy policy uses clearer language that we hope will explain our intentions more accurately this time. We are deeply sorry for the significant lapse in communication caused by the original privacy policy document.”

The team has also removed provisions that banned users under the age of 13 from using Audacity.

For Audacity users that have remaining concerns about the application’s status, a ‘fork’ of the audio editor has been created, Tenacity. Developers that want to contribute can see project info at Github.