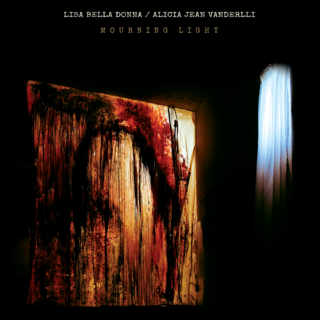 Behind The Sky has announced its 17th release, a new live album by ‘sonic sorceress’ Lisa Bella Donna.

Because of the album’s 78 minute length, it will also be the label’s first CD release.

Here’s what Bella Donna has to say about the new album:

“Mourning Light is a live performance, in collaboration with my dear friend and visual artist, Alicia Jean Vanderelli. In February 2021 she contacted me about a collaboration between the two of us at her sprawling beautiful art gallery. I would orchestra music and fill the room with sound, she would paint a 20 foot self constructed plastic room from the inside out.

Initially, we were just going to do the piece together / alone. Then we considered two shows with very limited audiences. This was such an imperative because it allowed us as performers the opportunity to experience the circulation that only comes when connecting to an audience in real time. It was the first, live public performance either of us had done since Covid19 & lockdown. Needless to say, it was an intensely cathartic and poignant journey throughout each performance. This recording captures the second & final performance of the night.”

The album was recorded and mixed to Tascam DA20 2-channel digital audio tape.

It’s available to pre-order at Bandamp. You can preview the album now via the embed below: