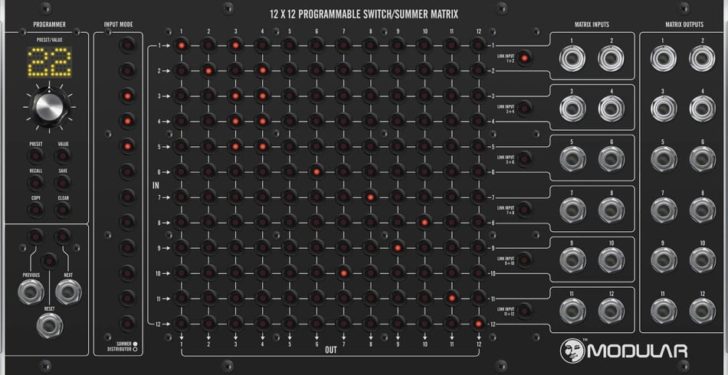 The M 595 12 x12 Programmable Switch/Summer Matrix, above, is a solution to manage the distribution and/or mixing of 12 by 12 DC-coupled and buffered inputs and outputs, fully analog with a high precision signal path.

It has 99 preset locations, so you can create sophisticated routing and mixing setups and then save and recall them as needed. For example:

Details are available via the Moon site (pdf).

Both delays work simultaneously and one can fade between them to create multi-tap delay effects.

BBD delays are analog delays that essentially sample the state of the signal, store it, pass it down a series of capacitors in a manner similar to the idea of a firefighting bucket brigade, and then output it at the end of the chain.

Most parameters can be voltage controlled, allowing integration in a complex modular setup.

This is a dual VCA module, in a single panel width. It features two signal inputs and outputs each, two modulation inputs, continuous linear/exponential controller, plus switchable AC/DC mode.

Here’s a video intro to the new modules, via Sonic State:

See the Moon site for details.