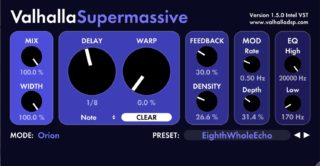 Supermassive is considered by many to be one of the best free effects plugins available. The plugin is designed for “luscious clouds of reverb, otherworldly delays, and swelling waves of feedback”, according to the developer.

Here’s what Costello has to say about them:

“These are WEIRD reverb algorithms, based on some advanced extensions of Michael Gerzon’s feedback delay network theory. Both Orion and Cassiopeia can sound quite sparse at the beginning of their decay, but can quickly build in echo density with non-zero settings of the Density control. The Density control also has a lot of influence on the reverb decay, with high density settings resulting in very long decays regardless of the Feedback setting.

Cassiopeia is the “smaller” of the two algorithms. In general, you will get shorter decays and echo patterns when using Cassiopeia, compared to Orion. One of my favorite settings is to set Warp to 0%, and use Density and Feedback to get echos that have a noticeable pulse on every 4th repeat. In this piece, I’m using 2 instances of Cassiopeia, once for a reverb that starts sparse and gets denser, and another for the pulsing repetitive echo:

Orion is “twice as big” as Cassiopeia under the hood, but this results in much longer reverbs and echoes than Orion, due to some laws of reverb physics that are a mystery even to me. Set Orion to the same settings as listed above for Cassiopeia, and you can get a mysterious echo that has a noticeable pulse on every 8th repeat. Turn up the Warp and Density values, and you will get truly massive modulated reverbs that can last for upwards of several minutes. Here’s an example of a single Orion instance used to get a long modulated looping echo:

Orion and Cassiopeia are definitely not conventional reverbs. These are weird, tricky reverb & delay algorithms, and we’re offering them to you in the spirit of exploration! In order to help guide you on your curiosity voyage, we’ve created a number of presets under the LATE 2021 preset folder that showcase some of the applications of Cassiopeia and Orion.”

Supermassive is available now as a free download for macOS & Windows.