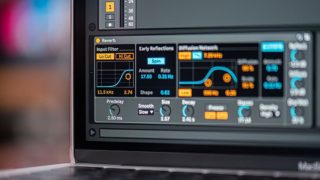 Ableton has announced a public beta of Live 11.2, an update that introduces an improved Reverb, adds support for AUv3 and more.

Reverb has been updated with a refined interface, new Density controls, a new switchable filter, CPU optimizations and more.

In addition, the update includes a variety of bug fixes and other performance improvements. See the Ableton site for details.