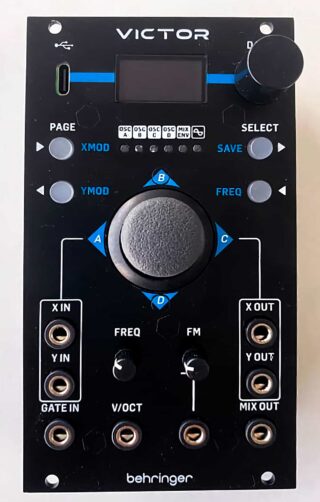 The Prophet VS introduced Vector Synthesis – an approach to synthesis that lets you position four different oscillator waveshapes at the extremes of an X/Y grid, and then control the waveshape mix, using a joystick controller or other types of modulation.

Here’s what they have to say about Victor:

“We have succeeded to move the PRO-VS vector engine into a Eurorack module and called it the Victor.

The amazing morphing function allows the merging of different oscillators.”

Behringer says that the USB connector will let Victor be used polyphonically.

Behringer didn’t say where the module name comes from, but readers of a certain age may recall a running gag in the classic disaster comedy film, Airplane, that plays on the word ‘vector’:

Note: Behringer has tagged many of its recent introductions as ‘hardvaporware’, because they can’t get the components needed to put the designs into production. Because of this, details on pricing and availability are to be announced.