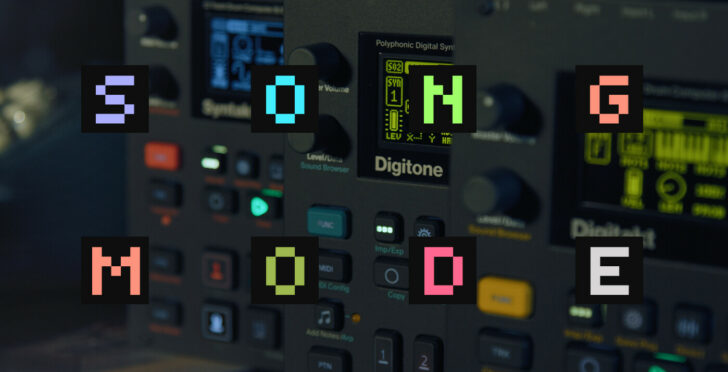 For some, it may be a “Hell freezes over” moment, because Song Mode has been one of the most popular feature requests for these devices.

Here’s what Elektron has to say about it:

“It’s fair to say that Song Mode has been a somewhat generously requested addition to the Digi Trinity, and we’re delighted to bring this powerful feature to those machines.

Want to have a deeply customizable backing track, leaving your hands free for other sweet gear? That’s now possible. And so much more. Extend beyond the limits of the 64-step sequencer, giving you the possibility of longer phrases. Create entire set-lists in a single song, and use it as the springboard for your wicked performance, going off-piste whenever it feels right. Sequence external devices and have them dancing to Song Mode’s tune, turning the Digis into fully-fledged MIDI beasts.

There are also plenty of creative tricks to explore as well, ensuring that hitting play is only the beginning of Song Mode’s potential.

Song Mode may be the show stealer, but we also have a bunch more excellent features landing across the Digis. There’s Portamento, Legato, and global FX/mix coming to Syntakt, and Keyboard Fold and a wider range of scales arriving on Digitakt and the Digitones. For a full list of new features, improvements, and squashed bugs, please check the release notes.”

The update continues Elektron’s tradition of releasing massive free updates for established products, like adding a polyphonic mode to the Analog Four/Analog Keys; adding trig conditions to the Octatrack; and introducing Overbridge.