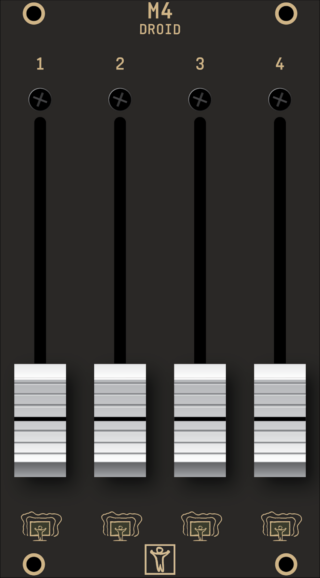 The new “M4 Motorfader Controller” is the first ever Eurorack module with motorized faders.

The M4 is a controller that connects to the Droid Master. Droid is a universal CV processor for generating and processing control voltage for Eurorack modular systems.

One M4 module has four motorized sliders, as used in professional digital mixing consoles. The usual configuration is one or two M4 (so four or eight faders), but up to 16 controllers can be connected per Droid.

The faders can be used for any task, like setting many different parameters per knob or CV presets. Developer Mathias Kettner says that the Motorfaders are especially exciting to use as a performance sequencer. By automatically switching the faders between different “levels”, it is possible to build a sequencer with multiple tracks and multiple CV values and parameters per track with just one set of faders.

The faders always show the currently valid values and do not have to be “fetched” as it is the case with non-motorized simple faders.

The M4 can also generate noticeable haptic resistance via the motorized faders using “force feedback”. This allows the M4 to create artificial notches. For example, in sequencer mode, you can literally feel each note of the scale in the fader. This makes intuitive music making easier, since you don’t need a display to set the desired value.

Another type of force feedback is the simulation of a kind of “pitch bend wheel”. Here, the fader automatically pushes back to its center position when moved away from it, as if pulled by an invisible spring.

The Droid Forge, released a few weeks ago, completes the Droid ecosystem. The “Forge” is a graphical program for Windows and Mac, with which the Droid can be configured with mouse or keyboard. Previously, the configuration of the Droid required the creation of a text file. These files are still supported, but the Forge makes using the Droid System much easier. The software is available free of charge.

The new modules are part of the Droid platform. See the developer’s site for details.