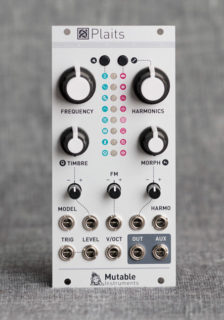 Mutable Instruments has released a free firmware update for the Plaits that adds a DX7-compatible 6-Operator FM synth and 7 more synthesis models.

This new -/+ control scheme gives access to an orange bank of synthesis models for pitched sounds:

The module can also now receive audio data on its TIMBRE input to load custom data into a synthesis model (only one synthesis model can be altered at a time). This new feature is available for the following models:

The update is available now at the MI site.