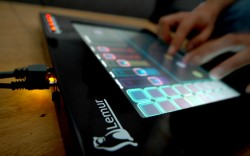 The Lemur is a sleek portable controller for live performance computer music applications featuring a 12″ LCD display and a proprietary touch screen interface that can simultaneously track multiple fingers.

Users configure the Lemur using an editor application that runs on Mac OS X, Windows XP, and Linux. Users drag and drop graphical control objects such as faders, buttons, two-dimensional area controllers, and status monitors to create interfaces. After a collection of interfaces is uploaded to the Lemur, the device sends data to parameters in a sound-generating application when a user touches objects in the display. Performers can flip between interfaces on the Lemur using buttons located above the touch screen.

The Lemur’s interface objects can be customized with JazzMutant’s “physical” properties that include friction, smoothing, and fade-in and fade-out. For example, faders with decreased friction “glide” across the screen and can even “bounce” after hitting zero. Objects can also transmit data based on complex floating-point mathematical formulas, moving far beyond the 0-127 limitations of typical MIDI controllers.

JazzMutant expects to deliver the first Lemurs to customers in April 2005. Cycling ’74 announced a projected US retail price of $2495 and plans to sell the Lemur via its web site and through selected retailers.

More information is available at the Cycling ’74 site.