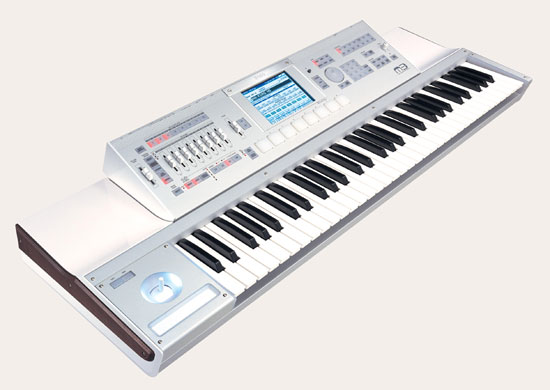 2007 Winter NAMM Show: Korg introduced the droolworthy M3 Music Workstation/Sampler. The new keyboard represents the third generation of Music Workstations from Korg. It inherits elements from the flagship Oasys, distilled into an affordable music production package with a new tone generator, a wealth of innovations and new sounds.

This new chip-based synthesis system, EDS (Enhanced Definition Synthesis) shares much of the Oasys’ HD-1 lineage, including low-aliasing oscillators, a powerful new filter topology, detailed envelope generators, plus a Drive parameter and AMS Mixers. All second-generation KARMA functions from the Oasys are included.

256 MB of ROM incorporates the “best-of” OASYS ROM into a new soundset. 512 Programs and 384 Combinations are onboard, with space for 1,664 Programs and 1,792 Combinations. For increased power, the EXB-RADIAS expansion board adds a 24-voice, single timbre version of the MMT synthesizer used by the RADIAS and R3 synths.

The color TouchView display doubles as an X/Y pad for controlling synthesis and effects parameters, while changing colors in response to movements. The M3 features the same type of real-time control surface as first featured on OASYS — eight sliders and switches for tweaking internal sounds, mixing tracks, interacting with KARMA, controlling external hardware and more. Eight velocity-sensitive pads can be used to trigger notes, chords and controller messages for a variety of applications.

An all-new Drum Track feature provides user-programmable drum grooves to jam with in Program and Combi modes, integrating with KARMA, or song-writing. Over 500 patterns with a natural sound and feel are included.

Bundled Editor/Librarian software works stand-alone or as a plug-in within host software via USB MIDI. Additionally, a new EXB-Firewire option enables the M3 to interface both audio and MIDI with a computer using a single cable.

The Korg M3 series instruments are slated to start shipping in June 2007 with pricing TBA.