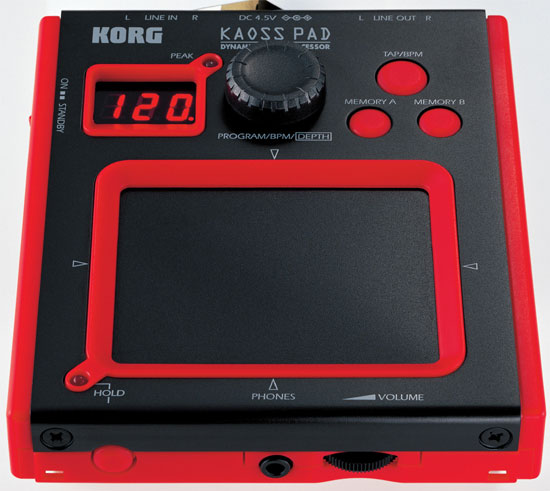 The mini-KP offers the same interface and real-time fingertip effects as other Kaoss models, plus many features taken from the new KP3, packaged in a compact body with battery operation for shirt pocket portability. Korg’s mini-KP is designed for DJ club performances, use with a variety of musical instruments, home studio applications, and use with portable audio players.

The heart of the mini-KP is the KAOSS pad, an X/Y touchpad that allows the user to control multiple effect parameters in real time using simple tapping and rubbing gestures, creating performance effects that would be impossible on traditional processors.

The mini-KP contains 100 effects Programs covering a wide range of musical styles. These include essentials — filters, reverbs and delays — as well as more unique effects such as a low-high-band pass filter that can cut specific frequency ranges; a decimator that intentionally degrades the audio quality for unique sound possibilities; a looper & pitch shifter that captures and repeats incoming audio, retuning it in real time as the pad is manipulated; many BPM-synced effects; plus synth sounds derived from the KP3’s RADIAS-inspired engine.

While touching the pad to apply an effect, the Hold function can be used to “freeze” the current effect setting so the user can remove their finger from the unit. Two Memory Keys store the selected effect program, the Hold function on/off status, and the effect depth for instant recall.

A TAP/BPM button detects the BPM (tempo) to synchronize the mini-KP to an audio input source, or can be manually tapped to adjust the tempo. An FX RELEASE function adds a slight delay “tail” when the user’s finger is removed from the pad, providing smooth transitions and decays when changing effects. The mini-KP can also operate in a direct-connection mode or via a send from a mixer, for integration into any system.

The Korg mini-KP Dynamic Effect Processor is expected to be available March 2007 at a U.S. MSRP of $250.