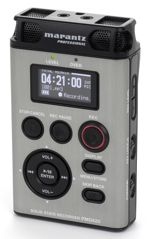 The PMD620 offers direct to MP3 recording in three quality levels, as well as fully uncompressed, CD-quality 44.1/48 kHz .wav format in 16 or 24-bit resolution, allowing the user to configure the PMD620 for a wide variety of applications, from extended-length voice recordings to high-quality music applications. Sound quality is enhanced by the inclusion of two condenser microphones on the PMD620, as well as line and external mic inputs, and an external mic output.

The new PMD620 use SD flash memory for data storage. The PMD620 accepts memory cards of high capacity (up to 2-TB, 2048 gigabytes).

The PMD620 offers one-touch recording using a button with its own tactile feel and red highlight illumination. The unit’s transport controls will be familiar to users of personal portable music devices, and incorporates a thumb-operated scroll wheel and a vivid organic LED (OLED) display screen, one of the first in the industry, which uses very little power to illuminate, thus extending the unit’s battery life. (The PMD620 is powered by two AA batteries.)

The display’s black background means that all alpha-numerics and function icons are always crisp and easy to read. The screen is also configurable thanks to two font sizes, allowing more information on the screen with the smaller font and highly readable key information with the larger one.

Included in the firmware is “Copy Segment” editing, which uses non-destructive cut-and-paste-style editing to create a new sound file, which can be up/downloaded via the built-in USB port. Another menu feature, “Skip Back,” allows transcribers the ability to review recorded audio from 1 to 60 previous seconds. And the PMD620’s USB 2.0 port allows drag-and-drop transfer of files to a PC. “Level” and “Peak” LEDs let you know the status of your input signal, and you can toggle between four displays screens that provide elapsed time, time remaining and other key data.

The PMD620 will be available in November. Pricing is expected to be about $400.