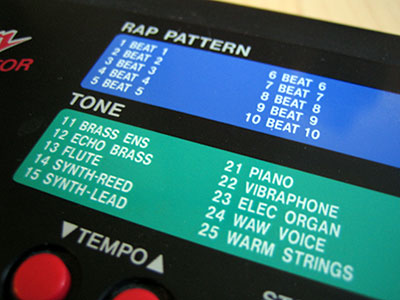 MPC2000xl has released a free sample library based on the Casio Rapman Rap-1.

The samples were taken directly from the line-out of my own Rapman, operating on a fresh set of batteries and recorded into Logic Express at 16-Bit/44.1 kHz resolution. While being recorded, the output of the RP-1 was at the highest possible level to give you the maximum signal-to-noise ratio. The samples were then carefully cut and processed with a touch of compression to give them a little more punch.

I made a clean and normalized 16-Bit version of each sound first and used Logic’s Bitcrusher plugin to create three variations of each. So there is not only a 16-Bit sample but also a 12-, 8-, and 4-Bit version, so you get maximum variety… While decreasing the bit-rate, I also increased downsampling in order to make the variations even more dirty (check out the nice 12-Bit snare for example).

The final samples were all exported as mono 16-Bit/44.1 kHz .wav-files so you can load them into your sampler of choice. In addition to the individual samples, I created a program for Akai’s MPC2000xl with the samples laid out in rows and the bit-rate decreasing from left to right. The program should be working on other MPCs like the 2000 too, but don’t take my word for it.

A lot of old Casios were pretty horrible sounding at the time, when you compared to other devices available at the time. Looking back, though, they can be appreciated on their own merits.