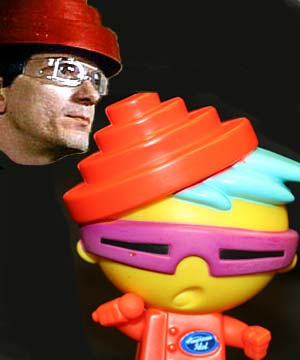 In April, McDonald’s introduced a series of American Idol Happy Meal toys based on a range of music styles, including Disco Dave, Country Clay, Rockin’ Riley and Soulful Selma.

Devo’s complaint is that the toy “New Wave Nigel” is based on the band’s image, and that the doll plays a Devo-esque song.

Bass player Gerald Casale said the band were taking legal action against McDonald’s for using their copyrighted hat without permission.

“We are in the midst of suing them,” Casale told AAP.

“This New Wave Nigel doll that they’ve created is just a complete Devo rip-off,” said Devo bassist Gerald Casale, “The red hat is exactly the red hat that I designed, and it’s copyrighted and trademarked.”

While it’s clear that this toy was derived from Devo’s trademark image, you have to wonder if Devo itself has devolved, when it’s suing McDonalds over appropriating the band’s 25-year old image, instead of doing something new.