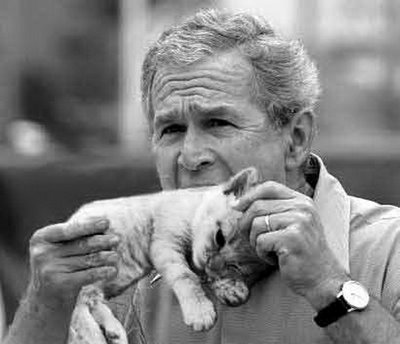 We know you don’t come to Synthtopia to read about politics – you may even come to the site to escape it for a while.

But – can George W. Bush be gone soon enough?

Bush’s legacy to his country will be 8 years of incompetent administration, the worst deficits in history and laying waste to traditional Republican values.

You might think that music and musicians could escape George W. Bush, but no.

Massive Attack has publicly condemned the use of their music by the Bush administration as a tool for interrogation and torture.

Nine Inch Nails’ Trent Reznor has just made this statement, Regarding NIN music used at Guantanamo Bay for torture:

It’s difficult for me to imagine anything more profoundly insulting, demeaning and enraging than discovering music you’ve put your heart and soul into creating has been used for purposes of torture.

If there are any legal options that can be realistically taken they will be aggressively pursued, with any potential monetary gains donated to human rights charities.

Thank GOD this country has appeared to side with reason and we can put the Bush administration’s reign of power, greed, lawlessness and madness behind us.

When news like this comes out, you realize that you can’t ignore it, compartmentalize it or think that this stuff won’t affect what you do.

George W. Bush has bought the domain name for his Presidential library back from cybersquatters – so lets hope that he gets to work on patching up his legacy, so we can think about patching up ours.

35 thoughts on “Can George W. Bush Be Gone Soon Enough?”