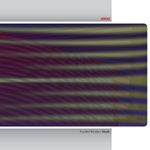 Shade is scheduled for release on March 23rd, 2009, and looks like it will be a treat for fans of synth music.

Shade is the studio album follow-up to Obsessive Surrealism (DiN26 – 2007) and is the fifth CD release by Parallel Worlds (the main musical project of Greek electronic musician Bakis Sirros).

via Bakis Sirros in the synth forum