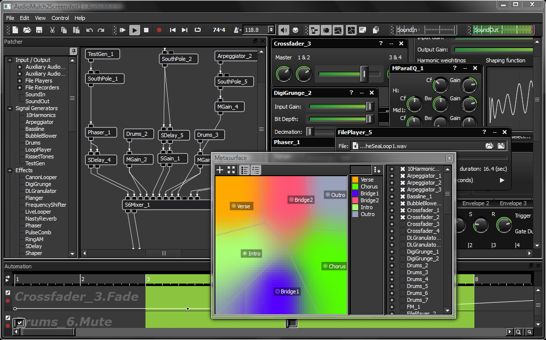 AudioMulch has announced that AudioMulch 2.0 interactive music studio is now in the final stages of development. The release will take place on May 1, 2009. Apologies to existing users for the delay, and thank you for your patience.

AudioMulch 2.0 is not just a new version, but “a foundation for a new cycle of feature development and improvements that will be rolled out in regular updates after the 2.0 release.”

AudioMulch 2.0 will run on Windows (XP, Vista) and natively on Macintosh OSX (Intel only).

Improvements to the AudioMulch core will include:

The AudioMulch 2.0 user interface has been re-coded from the ground up. This has lead to numerous work-flow improvements, including:

As previously announced, a full version 2.0 licence will be priced at $189 (USD). All AudioMulch 2.0 licences will be valid on both Windows and Mac OSX.

The upgrade fee for licenced users of version 1.0 will be $89. New users may find better value by buying AudioMulch 1.0 now and upgrading upon release of version 2.0. A pre-purchase upgrade to version 2.0 is available to volume education customers contact [email protected] for more information.