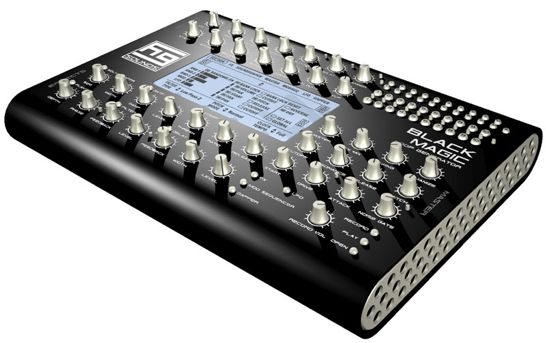 HG Sounds has introduced Black Magic Loop Generator VSTi for Windows, a “loop workstation with the ability to generate diverse loops with a single mouse click”.

It’s scheduled for release on the 24th of April for £130. You can download a set of demo loops here (.rar).

Black Magic Loop Generator looks like it could be a cool new VSTi, but we could do without the awesomely droolworthy fake 3D rendering.

Demo video and details below. Check it out and leave a comment with your thoughts!

Black Magic Loop Generator creates loops that can instantly be recorded out to WAV, automatically named by BPM and timestamp. The idea developed to make sample based loops an easy and fun process, as loop creation is generally a time consuming process.

Black Magic can also be used as a standard midi drum machine and also has the ability to jam with the individual sequences in real time. It has 10 Samplers each with its own sequencer and many adjustable parameters. It uses standard WAV files and ships with a large library of samples, but users can easily add their own.

There is also an FX section which includes a Compressor/Limiter, Delay, SoundScaper, Flanger/Filter and Drive as well as many Modulation options including randomizers, a Modulation sequencer and an LFO.